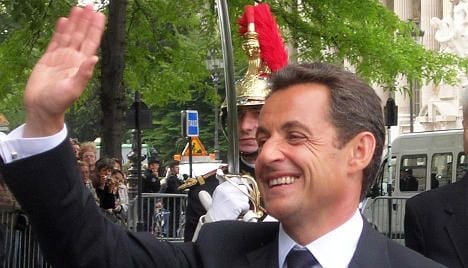 The poll, carried out by LH2 and published on Sunday by Yahoo, shows the president’s popularity jumping five points while his main rival in next year’s presidential elections, François Hollande, slumps by nine.

France has a two-round voting system for elections where a broad list of candidates in the first round is narrowed down to a run-off between the top two in the second.

According to the poll, Socialist François Hollande would get 30 percent of first-round votes, just ahead of the president on 29 percent.

Marine Le Pen of the far-right Front National would be third placed on 15 percent.

If Sarkozy and Hollande were to face each other in a second round run-off, the poll says Hollande would still comfortably win by 58 percent to Sarkozy’s 42 percent.

The new figures were welcomed by the president’s supporters.

A spokesperson at the Elysée Palace, the official resident of the president, said that “the way the French see the behaviour of the president has undergone a profound change,” according to daily newspaper Libération.

Sarkozy has been very visible over recent weeks as he works with other leaders, particularly Chancellor Angela Merkel of Germany, to solve the crisis over the euro.

He gave a joint interview with Barack Obama on French television at the end of the G20 meeting in Cannes, which he hosted.

“The French are convinced that the survival of the whole system is at stake and that Sarkozy is no longer exaggerating,” said Jérôme Sainte-Marie of the polling organization CSA to Libération.

For Hollande, it is likely that his honeymoon period is now over.

“Before he was the centrist candidate in the primaries,” said François Miquet-Marty of another opinion poll company, Viavoice. “Now he is the candidate of the whole left.”