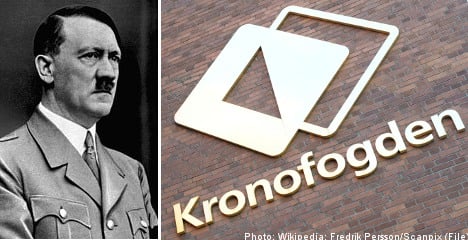 The seven paintings were originally thought to have been painted by the Nazi dictator and were slated for sale to pay off debts, according to a report in the Aftonbladet daily.

The agency hoped that the sale would bring in several hundred thousands of kronor but after seeking expert advice, they are thought be worth a only a few hundred.

“We engaged a man who I consider to know what he is talking about and the answer we received was that the reproductions were worth a total of 500 kronor,” said district court prosecutor Jörgen Larsson.

The Jewish association in Stockholm reacted angrily to the planned sale, but the authority has argued that it can’t consider ethical factors in settling outstanding debts.

“It is symbolically unfortunate that people earn money on these items,” said David Lazar at the association to Aftonbladet.

Adolf Hitler maintained that art was one of his major lifelong interests. He is believed to have sold thousands of paintings and postcards during his time living in Vienna.

There was a keen market for his work during the time of the Third Reich and there remain collectors keen to get hold of works by the former Nazi leader.

Hitler was known to describe himself as something of a frustrated artist and while alive often made grand claims pertaining to his artistic prowess.

Austrian police officers patrol at the house where Adolf Hitler was born during the anti-Nazi protest in Braunau Am Inn, Austria on April 18, 2015. Photo: JOE KLAMAR / AFP

“The suspect has been arrested on orders of the Vienna prosecutors” and transferred to prison after a search of his home, said an interior ministry statement.

Police seized a mixing desk, hard discs, weapons, a military flag from the Third Reich era and other Nazi objects during their search.

Austrian intelligence officers had been trying for months to unmask the rapper, who went by the pseudonym Mr Bond and had been posting to neo-Nazi forums since 2016.

The suspect, who comes from the southern region of Carinthia, has been detained for allegedly producing and broadcasting Nazi ideas and incitement to hatred.

“The words of his songs glorify National Socialism (Nazism) and are anti-Semitic, racist and xenophobic,” said the interior ministry statement.

One of his tracks was used as the sound track during the October 2019 attack outside a synagogue in the eastern German city of Halle.

In posts to online forums based in the United States, the rapper compared the man behind the 2019 Christchurch shootings that killed 51 people at a New Zealand mosque to a saint, and translated his racist manifesto into German.

Last September, an investigation by Austrian daily Der Standard and Germany's public broadcaster ARD said that the musician had been calling on members of neo-Nazi online forums and chat groups to carry out terrorist attacks for several years.

They also reported that his music was used as the soundtrack to the live-streamed attack in Halle, when a man shot dead two people after a failed attempt to storm the synagogue.

During his trial last year for the attack, 28-year-old Stephan Balliet said he had picked the music as a “commentary on the act”. In December, a German court jailed him for life.

Promoting Nazi ideology is a criminal offence in Austria, which was the birth place of Adolph Hitler.