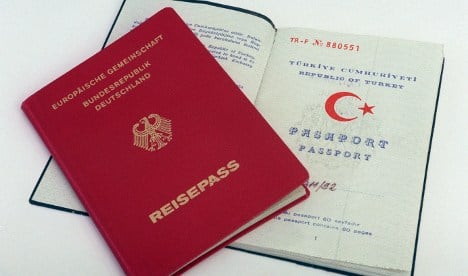 With all immodesty, I’m a perfectly integrated foreigner in Germany.

I speak German without a thick American accent, I voluntarily opted for state health insurance and, unlike many Germans, I even willingly pay my TV licence fees.

I have a German wife and a half-German child. There’s just one thing I won’t have for the foreseeable future: a German passport.

That’s not because I don’t want one – just the opposite. After almost 14 years in this country, I’d gladly become a German citizen. I would have eagerly voted in the Berlin state election last month. But I don’t care to sacrifice my American passport for the privilege. Fifty years after the first Turks came to Germany, there are millions of people here in a similar situation.

And why should we be forced to abandon our cultural ties? The United States, Canada, Britain, France, Sweden and countless other countries have no problem with dual citizenship. But Germany, so modern in so many ways, sadly still clings to horribly antiquated concepts of nationality.

Some German politicians – often conservative and Bavarian – believe that I and more than two million Turks simply aren’t worthy of German citizenship because we refuse to surrender our other passports.

If I were French, I wouldn’t have this dilemma. I could vote and participate in this country’s political life – despite retaining my old citizenship. Hoping to foster Franco-German friendship, the otherwise so stingy Germans allowed their pals west of the Rhine to have dual citizenship back in 2003. This was a nice gesture however, it also happened to be rather hypocritical one.

Shortly thereafter, Germany was compelled in 2007 to give this right to all EU citizens, and not just the French, since defending such a blatant double standard would have been impossible in the European courts.

But three generations Turkish immigrants – and a few well-integrated Americans – are still discriminated against. I’m aware our countries of origin aren’t part of the European Union, but that doesn’t justify German inconsistency.

I know a Mexican living in Munich who recently became a proud German because Mexico simply refuses to strip people of their citizenship as Germany requires of naturalized immigrants. Once a Mexican, always a Mexican. Yet conservative Bavarian politicians appear to be handling this affront in their midst just fine.

The state premier of Bavaria, Horst Seehofer, and many other German politicians claim you can’t be a loyal German citizen while holding onto a second passport. But speaking as someone with experience in both Europe and America, that’s nationalistic nonsense.

Perhaps Seehofer should ask himself if his conservative colleague David McAllister is qualified to be the premier of Lower Saxony. The Christian Democrat just happens to be half Scottish with both British and German passports. Does anyone seriously question his loyalty to Germany?

Apparently what goes for David the top politician doesn’t apply to Mehmet selling fruit and veg on the corner. Because just like the nasty stereotype that Turks in Germany are only up to being greengrocers, Germany’s immigration policy allows for the clear discrimination against “unwanted” foreigners. This double standard on dual citizenship is an institutionalized form of the prejudice displayed during the acrid integration debate sparked by ex-central banker Thilo Sarrazin last year.

Making matters worse, the so-called Optionspflicht forces many young German citizens to choose between two nationalities simply because their parents are foreigners. It’s almost as if they have to reject their family heritage if they wish to remain German after the age of 23. The centre-left Social Democrats and Greens are supporting an initiative in the upper house of parliament to end this damaging practice, but Chancellor Angela Merkel’s conservatives are staunchly determined to torpedo their efforts.

This is extremely detrimental to integration efforts, since it ensures foreignness is passed from generation to generation. It’s also ironic because it’s often the conservatives warning loudest against the threat of Turkish “parallel societies” in Germany. Allowing dual citizenship, on the other hand, would help ensure most families became thoroughly “German” by the third generation.

This isn’t rocket science – other immigration countries have shown Germany the way. The United States, for example, requires people to prove they spent at least five years there for them to be able to pass on their US citizenship to their offspring born abroad. Such measures are completely acceptable. This isn’t about handing out passports – it’s about someone’s commitment to their new homeland.

Fortunately, my child will never have to choose between Germany and America because my wife is German. But until Germany catches up with the rest of the world, I’ll remain a US citizen – and a German taxpayer.

A version of this commentary was first published in German by the Berlin newspaper Der Tagesspiegel.

I envision that you will receive individual plans for how to achieve this,” she continued. “Learn the language, earn a living, and have knowledge of Swedish society, so that you can fully become a Swedish citizen.”

Malmer Stenergard said it was still unclear whether a planned government inquiry into the possibility of “converting…existing permanent residence permits” would also open the way for those who have been given a permanent right to live in the country to be downgraded to a temporary residency permit.

“We’ll have to look at that,” she said. “There is a problem with positive administrative decisions and changing them, which the Migration Agency’s director general Mikael Ribbenvik has been aware of. We also state in the Tidö Agreement that basic principles of administrative law shall continue to apply.”

READ ALSO: What do we know about Sweden’s plans to withdraw permanent residency?

It further states that “an inquiry will look into the circumstances under which existing permanent residence permits can be converted, for example through giving affected permit holders realistic possibilities to gain citizenship before a specified deadline. These changes should occur within the framework of basic legal principles.”

Malmer Stenergard stressed that the government would only retroactively reverse an administrative decision (over residency) if a way can be found to make such a move compatible with such principles.

“This is why we state in the Tidö Agreement that basic principles of administrative law must apply,” she said.

She said the government had not yet come to a conclusion on what should happen to those with permanent residency who either cannot or are unwilling to become Swedish citizens.

“We’re not there yet, but of course we’re not going to be satisfied with people just having an existing permanent residency, which in many cases has been granted without any particularly clear demands, if they don’t then take the further steps required for citizenship.”

This did not mean, however, that those with permanent residency permits should be worried, she stressed.

“If your ambition is to take yourself into Swedish society, learn the language, become self-supporting, and live according to our norms and values, I think that there’s a very good chance that you will be awarded citizenship.”

She said that even if people couldn’t meet the requirements for citizenship, everyone with permanent residency should at least have “an individual plan for how they are going to become citizens”, if they want to stay in Sweden.

When it comes to other asylum seekers, however, she said that the government’s aim was for residencies to be recalled more often.

“We want to find a way to let the Migration Agency regularly reassess whether the grounds for residency remain. The aim is that more residencies should be recalled, for example, if a person who is invoking a need of asylum or other protection then goes back to their home country for a holiday.”