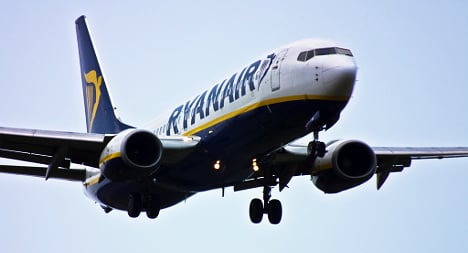 A handful of the several dozen cabin crew supplementing their diets with donated food while making do in accommodations near the Moss, Østfold airport have told their story to NRK television reporters. Despite living in one of the priciest countries in the world, staff appear to be making an average of under 11,000 kroner (US$1,932) a month.

An average gross salary per year appears to be 150,000 kroner, or below 158,400 — a government set minimum income for surviving in Norway and the amount a pensioner on a minimum state payout gets.

A former Ryanair staffer, however, said staff are suffering from getting by on wages below the cost of living in Norway.

“(I was) working sometimes for seven or eight hours for 300 kroner. I mean, this is Norway. It’s slavery, and I don’t think the Norwegian government can accept this and let it happen,” said ex-Ryanair Rygge cabin staff David Puglisi.

The report said other staff confirmed Puglisi was right about getting just 150,000 kroner a year. He said some of those colleagues have had to sneak onto the train to work to save  money.

Like the airline, staff pay tax to Ireland, a formality that puts them outside Norway’s carefully built up labour laws.

Meanwhile, customers are continuing to stream to Rygge for tickets to southern European destinations that have been lower than 100 kroner.

Norwegian labour leaders, meanwhile, called the news that Ryanair’s payroll is roughly half that of rival airline Norwegian another example of “social dumping”, a trade union catchword for the practice of employing low-cost staff in a high-cost country.

Norway’s unions recently fought a mostly successful battle to get building firms to pay Poles the going rate for carpentry and masonry work.

The Norwegian Federation of Labour Unions, or LO, has a court case pending with Ryanair. O’Leary and the company recently celebrated two million passengers in two years at Rygge, although the tough CEO said he could end Ryanair’s presence there if airport officials don’t lift limits on passengers.

RYANAIR
Ryanair to start flying from Arlanda this autumn

The flight from Dublin to Krakow made the unexpected diversion after a reported bomb threat, German newspaper Bild Zeitung said.

“We were notified by the Krakow airport that an airport employee received a phone call saying an explosive device had been planted on the plane,” said regional police spokesman, Sebastian Glen.

“German police checked and there was no device, no bomb threat at all. So we know this was a false alarm,” he told AFP on Monday.

“The perpetrator has not been detained, but we are doing everything possible to establish their identity,” Glen added, saying the person faces eight years in prison.

With 160 people on board, the flight arrived at the Berlin Brandenburg airport shortly after 8 pm Sunday, remaining on the tarmac into early Monday morning.

A Berlin police spokesperson said that officers had completed their security checks “without any danger being detected”.

“The passengers will resume their journey to Poland on board a spare aeroplane,” she told AFP, without giving more precise details for the alert.

The flight was emptied with the baggage also searched and checked with sniffer dogs, German media reported.

The passengers were not able to continue their journey until early Monday morning shortly before 4:00 am. The federal police had previously classified the situation as harmless. The Brandenburg police are now investigating the case.

Police said that officers had completed their security checks “without any danger being detected”.

“The Ryanair plane that made an emergency landed reported an air emergency and was therefore immediately given a landing permit at BER,” airport spokesman Jan-Peter Haack told Bild.

“The aircraft is currently in a safe position,” a spokeswoman for the police told the newspaper.

The incident comes a week after a Ryanair flight was forced to divert to Belarus, with a passenger — a dissident journalist — arrested on arrival.

And in July last year, another Ryanair plane from Dublin to Krakow was forced to make an emergency landing in London after a false bomb threat.