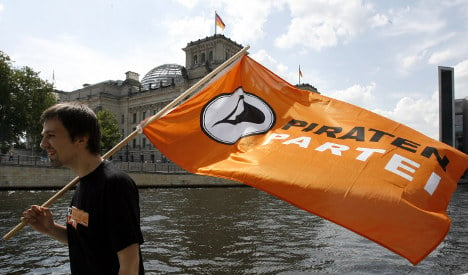 According to the latest Forsa survey, commissioned by Stern magazine and broadcaster RTL, the Pirates have enough public support to land seats in the federal parliament if there were a general election this week.

Forsa head Manfred Güllner said he was astounded by the speed with which the Pirates have gained prominence, adding that he had never seen anything like it.

“Even the Green party needed four years after their first appearance in the European election in 1979 before they got into the national parliament,” Güllner told news magazine Der Spiegel.

The Free Democrats (FDP), meanwhile, continued their freefall in the opinion polls. The junior partners to Angela Merkel’s coalition government lost another point since last week and have fallen to a new low of two percent.

Güllner said this result reflects the Berlin vote, where the FDP lost their seats in the state legislature. “But the party can revive in the coming weeks,” Güllner told Der Spiegel.

Merkel’s conservative Christian Democratic Union (CDU) remains steady at 31 percent, while the Social Democrats (SPD) and the environmentalist Greens both gained one point to reach 29 and 19 percent respectively. The socialist Left party continue to lose momentum, dropping two points to tie the Pirates at seven percent.

Despite their snowballing support, most Germans see the Pirates primarily as a protest party. Another Forsa survey said only six percent of voters would choose the Pirates because of their political goals.

Instead, 84 percent of those surveyed see Pirate Party supporters as people who no longer trust the mainstream political parties. As many as 81 percent of Pirates themselves shared this view.

One of the more surprising findings of the survey is that only 11 percent of potential Pirate voters said they voted for the Greens in the 2009 national election. This contradicts the received opinion that the Pirates’ success effectively scuppered the Greens’ chance of victory in last week’s mayoral election in Berlin.

The survey also said that the Pirate Party’s potential supporters voters are mainly men under 45.