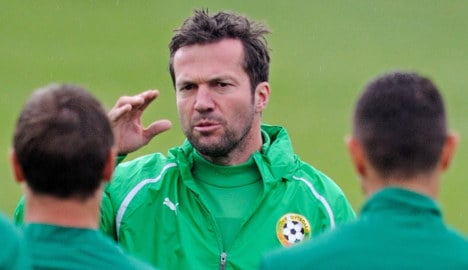 German football icon Lothar Matthäus was sacked as coach of Bulgaria on Monday following the national team's failure to qualify for Euro 2012.

“There were many reasons to release Matthäus, not only the poor results in the last matches. Pressure and negativity had also piled up in the squad, so the change was necessary,” BFU president Borislav Mihaylov said.

The legendary German midfielder, 50, was the first foreigner to take over as coach of Bulgaria when he was appointed last September with a remit to qualify for Euro 2012.

However, Matthäus leaves with Bulgaria out of the running for a place in next year’s finals in Ukraine and Poland, having managed just one win and five points from seven games in qualifying Group G.

In a number of recent interviews, Matthäus had blamed poor discipline and lack of will to win among the players as the reasons for his team’s poor performances.

He had however hoped to renew his contract, which was due to expire in November, to lead Bulgaria in the 2014 World Cup qualifiers.