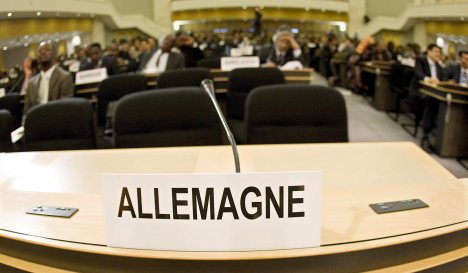 “We unfortunately cannot rule out that the Durban commemoration event in New York could be misused to make anti-Semitic comments as was the case at past conferences,” Westerwelle said, as part of a statement issued by the foreign ministry.

At the opening of the Durban summit in Geneva two years ago, the Iranian president delivered a speech in which he described Israel as the “most cruel and racist regime,” prompting some 40 representatives from European nations to walk out in protest.

This year’s event, dubbed Durban III, will mark the 10th anniversary of the Durban Declaration, an anti-racism agenda adopted at a UN conference in 2001.

The president of the Central Council of Jews in Germany welcomed the government’s decision to boycott the conference, calling it a show trial against Israel that should not granted legitimacy.

“The German government has sent a clear signal in favor of sensible and value-oriented politics,” Dieter Graumann told German daily Passauer Neue Presse on Saturday. He also urged Britain and France to abstain from participating in this year’s event.

“I hope that other big countries will follow Germany’s example,” Graumann said.

Westerwelle said Berlin’s decision was a reflection of the country’s special responsibility toward Israel. The announcement came on the sidelines of a meeting of EU foreign ministers in the Polish resort town of Sopot.

The German foreign minister said the choice to boycott the conference on September 22 was the result of an “intensive assessment within the German government.”

The announcement earned Westerwelle, a Free Democrat, rare praise from the FDP’s coalition partners. Phillip Mißfelder, the Christian Democrats’ foreign policy spokesman, said fears that the conference would be abused as a “platform for the defamation of the state of Israel” must be taken seriously.