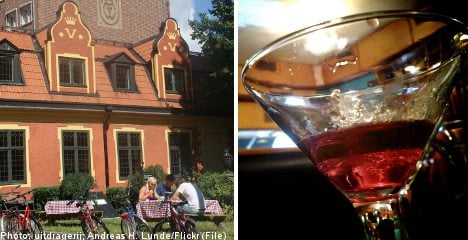 So how do you hook into all the fun and games in this vodka-loving nation after your strenuous studies reach a boiling point?

Even if you’ve only been in Sweden for about eight minutes, you can quickly gather that these northerly people like things organised, planned, and punctual.

And university party life is no exception.

If you find yourself at an institution that invites you to join a student ’nation,’ be ready for your social scene to make a quick jump into the bleary-eyed, fuzz-brained, red-zone at the drop of a hat.

Nations are essentially large social clubs, with – in a complete departure from the fraternity/sorority style arrangement common in the United States – the added bonus of mixed genders.

These groups, which represent the oldest student societies in Sweden, form the very pulse of student life on campus outside of the classroom and have been beating strong since the mid-1600s.

Two of the oldest universities in Sweden, Lund and Uppsala, proudly boast their intact nation culture on campus.

Each school offers a choice of 13 different nations for its students to select from while emphasising the idea that they bring individual social flavours to distinguish them from one another.

”There is a little something for everyone here – each nation has its own feel so you pick the one that best suits you,” explains Boel Nilsson, Curator of Lund’s Nation at Lund University.

The nations each bear a geographical name related to Sweden. Traditionally, students were required to become members of the nation associated with their home region.

The practice was meant to provide a means for students coming from outside the university area to socialise with other students from their native region and catch up on news from home.

Today, this requirement no longer exists, however. Although the nations still pride themselves on their uniqueness, despite that many offer extremely similar activities.

The groups are open to any registered student regardless of the department or level of study.

So what happens in a nation?

“It’s everything! From nightclubs, to bars, to theatre, orchestras, choirs, sports, lunch and even housing, nations do it all,” exclaims Nilsson.

Many nations have their own newspaper, sports teams, dance floors, radio programme, restaurants and pubs (cheap eats!), all of which are run voluntarily by the students.

Some even offer a limited number of student apartments to offset the infamous housing crisis faced by many newly arriving students.

For example, Lund’s Nation at Lund University is the school’s largest nation with more than 4,000 active members who maintain the attitude of “Lund’s nation is always open.”

They even have a skyline Penthouse, a locale known for its killer weekly parties and awesome weekend brunches.

In addition, they organize annual events such as Siste April, a semi-formal dinner, and OktoberFest, to a name only a few.

Other nations at Lund University focus on specific themes.

You can tap into your inner-rockstar with Sydskånska, which pledges to indulge your study time with the world’s best music. They run Lund’s only soul and funk club, and offer weekly jazz tea hours, a sweet reggae lair, a hip-hop club and a smoke and laser electro beat club.

“It’s really good to become a member of the nation that best suits you. It’s like a whole family of friends and that’s the best part,” says Nilsson.

Although nations are open to all students, once you’ve joined a nation you usually become involved in that group’s particular activities. Your campus I.D. card transforms into your gateway to the good times. You swipe it at the door and, poof!, gain entry to any event.

And, if you don’t become a member of a nation? Well, you could try to party at regular bars or clubs in your uni town, but apparently there won’t be many worth checking into and none with the true college spirit vibe.

Don’t panic if your school of choice is without nations. This does not mean that your social scene radar will sustain a mere buzz.

In the land of the highly organized, there is always an alternative!

Most universities offer their own type of similar student social clubs and/or pubs; they just don’t have the historical distinction of being a true nation.

For example, the individual departments at Örebro University each offer their own social club, which is then responsible for planning its own activities, including the college parties.

“All of the course sections organize their own parties with things like Pub Night or a semi-formal dinner,” says Ulrika Kvist, who works in school’s International Student office.

However, Kvist points out a clear line.

If you are an international or exchange student, there are additional groups available to you that help your transition to Sweden while bolstering your social life with students in the same predicament.

This does not, however, guarantee mingling with Swedish students.

“The social clubs for the exchange students versus the Swedish students are essentially the same, but some of their offerings do differ,” explains Kvist, and points to the Buddy System for new students as an example.

Up north in Luleå, students who take a break from skiing or boarding hit STUK, an on-campus restaurant and bar.

STUK is voluntarily run by students and offers a café, pub, cheap but tasty restaurant, dance floor and theatre stage. It’s the place to awaken your college party groove when up north.

Regardless of where you find yourself, and when you feel the need to let loose, you will be able tap into the good times on campus.

Until then, skål to the next happy hour!

Student groups plastered posters last week on the walls of a leading political science faculty in Grenoble that likened the professors to “fascists” and named them both in a campaign backed by the UNEF student union.

“These are really odious acts after what happened with the decapitation of Samuel Paty who was smeared in the same way on social networks,” she said on the BFM news channel. “We can’t put up with this type of thing.”

“When something is viewed as racist or discriminatory, there’s a hierarchy where you can report these types of issues, which will speak to the professor and take action if anything is proven,” Schiappa said.

Sciences Po university, which runs the Institute of Political Studies (IEP) in Grenoble in eastern France, also condemned the campaign on Monday and has filed a criminal complaint.

An investigation has been opened into slander and property damage after the posters saying “Fascists in our lecture halls. Islamophobia kills” were found on the walls of the faculty.

One of the professors is in charge of a course called “Islam and Muslims in contemporary France” while the other is a lecturer in German who has taught at the faculty for 25 years.