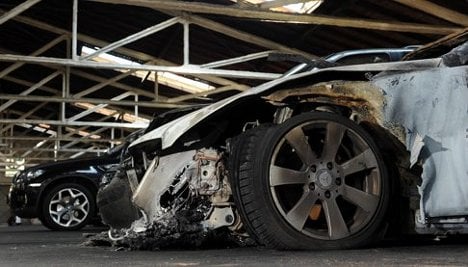 Arsonists set fire to cars in Berlin for a fourth straight night, destroying at least 11 vehicles in the early hours of Friday morning.

The wave of multiple arson attacks has prompted a sharp political discussion, with some lawmakers comparing those responsible with the terrorists of the 1970s leftist Red Army Faction (RAF).

Police said they were searching for at least three suspects, and have offered a €5,000 reward for information leading to the arrests of those responsible.

“The police can’t do it alone,” said Rainer Wendt, head of the DPolG police union, who called for a “zero tolerance” attitude. He said officers needed better equipment, including more thermal imaging cameras and helicopters.

Yet they do not share the widespread assumption that left-wingers or anarchists were responsible for the torching of more than 50 cars across the city this week alone. Nearly 160 have gone up in flames this year so far.

The capital’s Social Democratic mayor, Klaus Wowereit, set to defend his position in the September 18 state election, appealed on Thursday for people to keep their eyes open and report any suspicious activity to the police. “This is a case of pure vandalism and criminality,” he said.

But others have made stronger comments. Wolfgang Bosbach of Merkel’s conservative Christian Democratic Union compared the arson attacks with the start of the RAF terror campaign.

“The RAF terror also began with ‘only’ arson at on point,” he told the N24 television station on Thursday. “Therefore the danger is present that the violence is one day aimed against people.”

But the facts speak a different language, the police said. “The extreme left scene is not behind these actions, and has declared themselves not in agreement with them,” said police president Margarete Koppers. “These actions are rather frowned upon. They also have absolutely nothing to do with terrorism. There is no serious political aim cannot be determined.”

And although many of the burned cars are Mercedes, Audi or BMW, the wrecks left smouldering in the morning also include older models with child seats in the back, or others full of tradesman’s tools. Next to these, new, expensive jeep-type Japanese cars remain untouched.

“For us this is a sign that there is only a pseudo-political motivation, used by copy cats, and that there is also a pyromaniac background.”

She said the last far-left attacks were against police stations, after which the groups responsible published boasting statements. The torching of family cars in other areas of the city did not fit into the picture, she said.

But with the Berlin state election just four weeks away, the CDU has adopted the topic in its campaign literature, with state party leader Frank Henkel demanding more “intelligence service resources against the militant left.” He said the state government’s suggestion that a lone firebrand was a political distraction manoeuvre.

Yet the more excitable newspaper reports suggesting that the situation in Berlin could turn into riots comparable to those recently seen in London were dismissed by Chancellor Angela Merkel.

“I hope and am fairly confident that we in Germany will be spared from the events that we saw recently in London and other cities in Britain,” she said.

The police are waiting for the arsonists to make a mistake. “Serial criminals in particular are easy to catch because they always strike again, and make mistakes,” said Koppers.