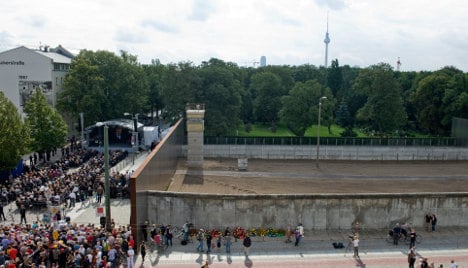 The remarks on Monday by Andrea Nahles, the SPD’s general secretary, came just days after Germany marked the 50th anniversary of the day the Berlin Wall started to go up with a memorial service and a minute of silence in memory of those who died trying to flee to the West.

The commemoration was marred by a handful of The Left (Die Linke) delegates at a party conference in Rostock, northern Germany, who refused to stand up in honour of the victims, and by the publication of an article in the far-left newspaper Junge Welt thanking the former East German communist regime for building the Wall.

A clear condemnation of the Wall is “an obligation The Left owe not only to their possible coalition partners, but also to all the victims of the Wall and their relatives,” Nahles told reporters.

Her warning comes just ahead of regional elections in Mecklenburg-Western Pomerania on September 4, and in Berlin on September 18, when coalition governments led by the Social Democrats are expected to be returned to power. In Berlin they govern in an alliance with The Left.

The SPD there forced a declaration from the PDS, the successor to the East German communist party which later merged with western socialists to form The Left, condemning the 1961 building of the Wall which separated the Western and Eastern sectors of Berlin for 28 years.

Berlin Mayor Klaus Wowereit, a Social Democrat in charge of the city-state’s government, Saturday described the Wall “as part of a dictatorial system, an

“The Wall is now history, but it must not be forgotten,” he warned, to applause from the crowd at the memorial ceremony.

Hundreds of people died trying to cross the Berlin Wall to freedom in the West.

“Questions surrounding the building of the Wall are highly charged,” Nils Diederich, a political scientist at Berlin’s Free University, told news agency AFP. “And repudiating the Wall is identical to repudiating efforts to restore the socialist system.”

Many believe that by attempting to justify the Wall “The Left are just trying to salvage the old East German identity,” he added, mobilising die-hard voters.

Some Left party members, including leader Gesine Lötzsch, have said building the Wall helped prevent an armed conflict during the Cold War, while others have justified it as “a historical consequence” of Nazi Germany’s invasion of the Soviet Union.

SPD leader Sigmar Gabriel, for his part, has said forming a coalition government with The Left at the federal level is out of the question.

It would be “incomprehensible” to form a coalition with a party “whose relationship to democracy and to German history is so open to question,” he told ARD public television.

The SPD has traditionally sided with the pro-environment Green party when looking for a coalition partner.

But the Social Democrats, over the past 20 years, has also agreed to form regional

governments with The Left in five of eastern Germany’s six states at various points, something which makes the party’s latest “emotional political pronouncements a little less credible,” said Diederich.