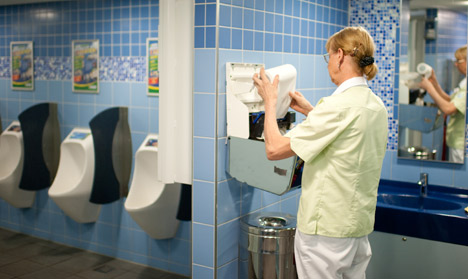 Motorists taking a bathroom break at a rest stop in Brandenburg might not get much privacy these days. Thieves made off with 22 stainless-steel toilet stall doors within a few days and, up to now, police are clueless.

The thieves hit five rest stops in eastern Brandenburg along the A12 and A10 motorways, stealing the custom-made doors that cost around €2,000 a piece.

“We have no knowledge about the guilty party or the location of the doors,” said spokesman Detlef Lüben of the Oder-Spree police jurisdiction.

While police suspect the doors were stolen to be used elsewhere, Gabi Jentzsch from door manufacturer Hering Bau thinks otherwise. She said the culprits probably plan to sell the doors as scrap metal, especially since stainless steel goes for about €1,420 per tonne these days.

However, she added, the thieves might well get an unpleasant surprise when they discover the doors they stole have stainless steel exteriors. The cores are made up of insulating material. It’s unlikely scrap dealers will pay much for them.

She said the theft of stainless-steel furnishings is not rare, especially from places that are not closely monitored, such as rest stops.

“I’ve never heard of a case that culprits have been caught or that their booty has been recovered,” she said.

While in the end, the thieves won’t be walking away with that much money, tax payers are certainly going to be picking up the bill. Police said total damages resulting from the door thefts, which will be paid by the federal government, are estimated at €110,000.