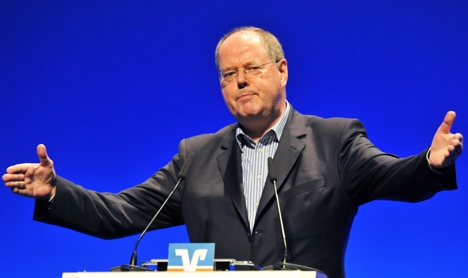 Parliamentary faction leader Frank-Walter Steinmeier, the candidate who failed to beat Angela Merkel in the 2009 election, called Steinbrück “one of our best” on Saturday. “Of course he belongs to the group from which the SPD will choose its next chancellor candidate,” he told the Rheinische Post newspaper.

The 64-year-old Steinbrück left the SPD leadership following 2009’s heavy defeat, and now carries no official position other than being member of parliament. Steinbrück served as finance minister under Merkel in the grand coalition between her conservatives and the SPD that governed between 2005 and 2009.

Steinmeier, Steinbrück and current party leader Sigmar Gabriel will hold a joint press conference on Monday to present the party’s position on the European debt crisis. The party is hoping to capitalize on the heavy criticism that Merkel’s European policy has faced recently.

While the SPD is still struggling to gain any ground in the opinion polls, Steinbrück remains a popular figure among Germans, who see him as a man who can keep a steady hand on the economy. The latest poll by broadcaster ZDF even found he was currently the country’s most popular leading politician.

Hamburg’s former SPD mayor Klaus von Dohnanyi told the Frankfurter Allgemeine Sonntagszeitung on Sunday, “It will probably be between Steinmeier and Steinbrück.”

Of the three most prominent SPD politicians, the poll said Gabriel is seen as having the least chance of beating Merkel.