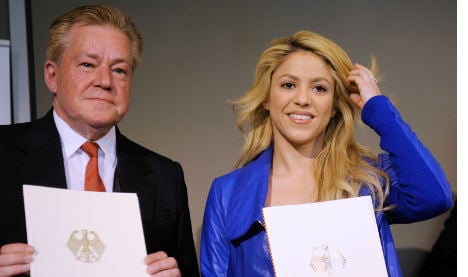 “The German government is an example for other world powers to get involved in the issue of education,” she told a press conference in Frankfurt on Saturday.

“Education is the key to eradicating poverty and for peace and global stability,” she said.

Part of the agreement sees Germany helping to finance the construction of a school for up to 1,400 children from poor families in the Colombian city of Cartagena.

Deputy Development Minister Hans-Jürgen Beerfeltz said that the aims of his ministry and of Shakira’s foundation Pies Descalzos (Bare Feet Foundation) complemented each other very well.

“Both organizations are convinced that poverty can only be effectively tacked through investment in education,” he said before signing the agreement.

The charity, which Shakira set up in 1997, is dedicated to helping people who have been displaced due to the decades-long conflict in Colombia. Many of those forced to leave their homes end up in poverty, particularly women and children.