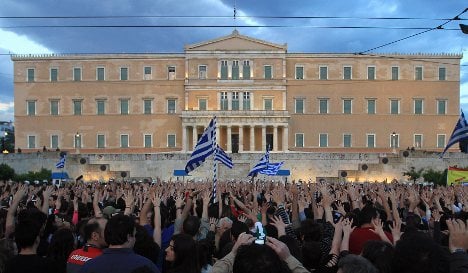 “I’ve clearly realized how Greece is making it really tough for its citizens” by implementing austerity measures, said Steffen Bilger, a member of Chancellor Angela Merkel’s ruling Christian Democrats (CDU) who would not normally be suspected of mollycoddling what some here condemn as spendthrifts.

Merkel herself, who has come under fire within her own party for agreeing to bailouts worth tens of billions of euros for Greece, Ireland and Portugal, recently criticized southern Europeans for taking too many holidays.

“We cannot have a currency (the euro) with one person getting lots of holiday and another person very little. Long term this can’t work,” she said.

Last year, as the financial crisis battered Greece, the popular daily Bild went as far as to highlight a suggestion by a conservative politician that Athens sell off some of its many islands to help pay off its debts.

Bilger, who was part of an eight-member parliamentary delegation that held talks in Greece this month, said the country was on the ropes and that fellow European Union members could hardly expect it to do more to cut its sky-high public deficit.

A bailout for Greece was put in place a year ago by the EU, the European Central Bank and the International Monetary Fund, involving loans of €110 billion ($157 billion) over three years.

But there are now grave doubts whether Athens can meet its repayments and talk of a second bailout, or even a drastic debt restructuring, is rife.

“Through privatizations and further savings, they (the Greeks) can manage without further aid,” Bilger suggested, but he acknowledged that current reforms were really hurting.

His CDU colleague Jürgen Klimke said he found Athens “in an awful state,” adding that this was “far from being my best trip to Greece.”

For Kai Gehring, a member of the opposition Greens whose party advocates restructuring the Greek debt, “I think it would be impossible to force new reforms” on them.

“Greece has really asked a lot of its citizens,” the Green delegation representative told AFP.

He also deplored that the German press “does not really speak of the efforts made by the Greeks and of the reform programme which crushes both public spending and investment.”

Delegation members agreed that public criticism of Greece in Germany had cast a cloud on bilateral relations.

“The German-Greek relationship is really in the dumps,” Bilger said.

Klimke agreed that they had heard “many things that we didn’t like” during the trip including accusations of rampant corruption – German conglomerate Siemens was snared in a major Greek bribery scandal – to an alleged failure by Berlin to pay war reparations in full.

“In all our talks our, opposite numbers tried to pass some of the blame on us, us the European Union, but especially us Germany,” he added.

But public opinion in Germany remains opposed to further aid for Greece.