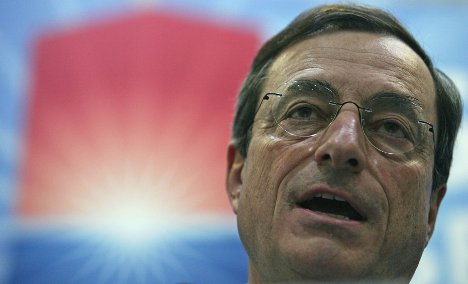 Merkel wants “the most German among the remaining candidates” to replace Jean-Claude Trichet when the Frenchman steps down in October, the paper quoted an unnamed official at the German chancellery as saying.

Bild, Germany’s top-selling newspaper, indicated Merkel had concluded Draghi had those “German” qualities of fiscal conservatism, commitment to a stable euro and willingness to push debt-laden eurozone countries towards reforms.

German government spokesman Steffen Seibert had insisted on Wednesday that there could be no agreement on the future ECB chief without Berlin’s backing, after France and Italy appeared to anoint Draghi, 63, at a summit in Rome.

But he stopped short of revealing whether Merkel supported Draghi, the current head of Italy’s central bank, saying Germany’s voice would be taken into account before a final decision is taken at an EU summit in June.

Meanwhile Bild itself, which holds powerful political sway in Germany, dropped its own reservations about Draghi and offered a lengthy list of what it saw as his attributes: strict, down-to-earth, ambitious, loyal and independent.

Just one year ago, Bild wrote “An Italian of all things!” to dismiss Draghi’s bid to replace Trichet, adding as recently as February that “inflation is as much a part of Italian life as tomato sauce and pasta.”

Merkel was said to be hesitant about Draghi in part out of fear of the reaction of Germany’s mass-market media.

Analysts say there is no other realistic alternative to lead the world’s second most powerful central bank after the Federal Reserve in Washington.

Germany’s own candidate for the position, Axel Weber, who is stepping down Friday as head of the powerful Bundesbank, pulled out of the race unexpectedly, leaving Berlin without a credible second choice.

Seasonal workers, domestic and cleaning staff, the self-employed, the unemployed and those on Italy’s ‘citizens’ income’ will be added to the categories of people in Italy eligible for a one-off €200 payment, ministers reportedly announced on Thursday evening.

The one-time bonus, announced earlier this week as part of a package of financial measures designed to offset the rising cost of living, was initially set to be for pensioners and workers on an income of less than €35,000 only.

However the government has now agreed to extend the payment to the additional groups following pressure from Italy’s labour, families, and regional affairs ministers and representatives of the Five Star Movement, according to news agency Ansa.

Pensioners and employees will reportedly receive the €200 benefit between June and July via a direct payment into their pension slip or pay packet.

For other groups, a special fund will be created at the Labour Ministry and the procedures for claiming and distributing payments detailed in an incoming decree, according to the Corriere della Sera news daily.

One new measure introduced at the cabinet meeting on Thursday is the introduction of a one-time €60 public transport bonus for students and workers earning below €35,000. The bonus is reportedly designed to encourage greater use of public transport and will take the form of an e-voucher that can be used when purchasing a bus, train or metro season pass.

Other provisions reportedly proposed in the energy and investment decree (decreto energia e investimenti), which is still being adjusted and amended, include extending energy bill discounts, cutting petrol excise duty and rolling on the deadline to claim Italy’s popular ‘superbonus 110’.

The €14 billion aid package, intended to lessen the economic impact of the war in Ukraine, will “fight the higher cost of living” and is “a temporary situation”, Prime Minister Mario Draghi has said.

The Local will report further details of the payment scheme once they become available following final approval of the decree.

ECONOMY
What’s in store for the Swedish economy in the second half of 2021?
Url copied to clipboard!