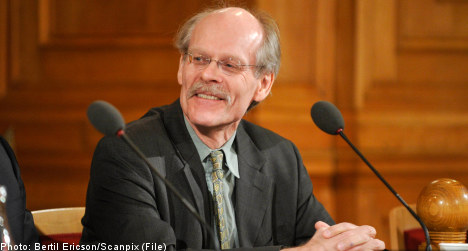 Riksbank Governor Stefan Ingves described the Swedish economy as fully recovered during a hearing on monetary policy during a Thursday morning hearing in front of the the Riksdag Committee on Finance.

“Output has largely returned to the pre-crisis level and unemployment is in retreat. Our assessment is that the high growth rate in the economy will gradually decrease in the period ahead and will approach normal levels,” he said.

World commodity prices are rising and resource utilisation is increasing, which will contribute to higher inflation in the coming period, Ingves explained.

Ingves also argued that the financial crisis mainly manifested itself in Sweden in the form of decreased demand from abroad.

“World trade fell heavily, as did Swedish exports. Sweden is a small, open economy that is very export-dependent, and GDP fell by more than 5 per cent in 2009, which was the largest fall since the Second World War,” he said.

According to new figures, GDP growth amounted to 5.5 per cent in 2010. This is the highest growth since 1970 and Sweden is now among those economies with the highest GDP growth rates in the world. At the same time, the indicators are very strong, suggesting continued high levels of growth throughout early 2011.

“All in all, it can be said that the financial crisis is now behind us and that the situation is in the process of normalisation. This also requires a normalisation of monetary policy in the form of rising repo rates in the years ahead,” he said.

Ingves warns, however, that a too strong currency could mean future crises.

“It may form a ‘problem’ in so far as the demand for Swedish exports will decrease and inflation may not increase in line with expectations, as imported goods become cheaper. Should this be the case, it may not be necessary to increase the repo rate as rapidly. But let me clearly emphasise that the Riksbank has no target for the level of the exchange rate,” he said.

In a press release announcing the move, the bank said that it needed to take action to bring down the current high rate of inflation, which it predicts will average 5.5 percent in 2022, before sinking to 3.3 percent in 2023.

“Inflation has risen to the highest level since the 1990s and is going to stay high for a while. To prevent high inflation taking hold in price and wage developments, the directors have decided to raise interest rates from zero to 0.25 percent,” it said.

The Riksbank, which is tasked by the government to keep inflation at around two percent, has been caught off-guard by the speed and duration of price rises.

Just a few months ago, in February, it said it expected inflation to be temporary, predicting there was no need to increase rates until 2024.

The last time the key inflation rate was above zero was in the autumn of 2014.

In the press release, the bank warned that the rate would continue to increase further in the coming years.

“The prognosis is that the interest rate will be increased in two to three further steps this year, and that it will reach a little under two percent at the end of the three-year prognosis period,” it said.

According to the bank’s new future scenarios, its key interest rate will reach about 1.18 percent in a year, and 1.57 percent within two years.

In a further tightening of Sweden’s monetary policy, the bank has also decided to reduce its bond purchases.

“With this monetary policy we expect inflation rates to decline next year and from 2024 to be close to two percent,” the bank wrote.

Annika Winsth, the chief economist of Nordea, one of Sweden’s largest banks, said the rate hike was “sensible”.

“When you look at how inflation is right now and that the Riksbank needs to cool down the economy, it’s good that they’re taking action – the earlier the better. The risk if you wait is that you need to righten even more.”

She said people in Sweden should be prepared for rates to rise even further.

“You shouldn’t rule it out in the coming year. Then you’ll have a once percentage point increase which will go straight into fluctuating mortgage rates.”