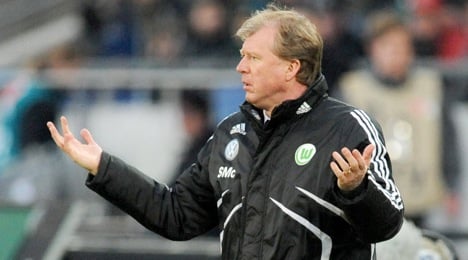 Ex-England coach Steve McClaren was sacked on Monday by Bundesliga side VfL Wolfsburg after just seven months in charge with the club just one point away from the relegation zone.

The 49-year-old became the first English manager to coach in the Bundesliga last August, but McClaren was dismissed in the wake of Saturday’s 1-0 defeat at Hannover, when he criticised star player Diego for missing a penalty.

McClaren’s co-trainer Pierre Littbarski will take over as caretaker coach.

“We were no longer sure that we could work with Steve McClaren until the end of the season with some stability,” said club sporting director Dieter Hoeneß in a statement.

“We have tried to make things work for as long as possible, but we have lost faith that we can be successful.”

Having coached FC Twente to last season’s Dutch title, McClaren took charge of the 2009 Bundesliga champions before the start of the season, but his team have struggled all season.

Despite being given a vote of confidence and allowed to go on a spending spree in January, McClaren’s sacking can be blamed on his team’s league position of 12th – just a point keeps them from 16th and the bottom three.

“Our main concern now is to widen the gap between us and the relegation zone as soon as possible,” said Hoeneß.

After McClaren sold star striker Edin Dzeko to Manchester City in January for €34 million, he spent Wolfsburg’s cash in a bid to improve his team’s faltering league position.

But Saturday’s defeat was the final straw as McClaren slammed Diego for disregarding the English coach’s order to let Germany striker Patrick Helmes take an 80th-minute penalty, which the Brazilian then missed.

“The players argued about it like kids in a playground,” said Hoeneß. “And because of that we were beaten in a match that we should never have lost.”

McClaren was sacked as England manager after the Three Lions failed to qualify for Euro 2008.

He was dubbed ‘The Wally with the Brolly’ by the British media after using an umbrella during heavy rain at Wembley in November 2007 during his final game in charge when his team were beaten by Croatia.