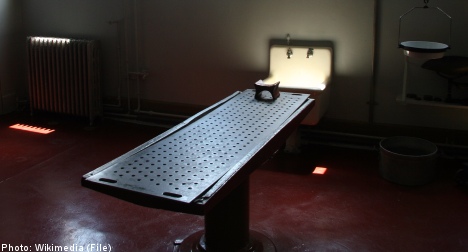 It currently takes an average of ten days from the time police in Gothenburg request an autopsy until the work is started, the Göteborgs-Posten (GP) newspaper reports.

The average wait time nationwide is only two days.

“The situation is totally unacceptable,” Peter Krantz, the chair of the Swedish association of forensic medical professionals (Svensk rättsmedicinsk förening), told The Local.

“Police are none too happy when it takes 14 days for them to get the results of an autopsy.

Krantz explained that Sweden, like many other western European countries, suffers from a serious lack of qualified forensic medical specialists and that the shortage can have dire consequences for the Swedish criminal justice system.

Currently, there are only 16 forensic medical specialists in all of Sweden, who are assisted by about four additional doctors who are officially employed at universities, but can assist in carrying out autopsies when needed.

According to GP, roughly 5,000 autopsies are carried out in Sweden annually, 800 of which take place in Gothenburg, resulting in an extremely high workload for Sweden’s forensic specialists.

Krantz warned that the delays that occur in carrying out autopsies can have a negative effect on criminal investigations.

“Roughly 10 percent of all murders are discovered through autopsies,” he explained.

“The more time that passes, the more likely it is that things will be missed.”

The delays can also mean that police lose precious time when they could be hunting for suspected killers, thus reducing the chances that the perpetrators will be caught.

Problems in Gothenburg have been especially acute in recent months following the departure of three doctors, according to Krantz.

After two doctors went on sick leave with heart problems, the Swedish Work Environment Authority (Arbetsmiljöverket) was called in to develop a plan to deal with overworked staff, according to GP.

The efforts proved fruitless, however, with staff telling the newspaper that the work environment is a “total catastrophe” for forensic medical specialists in Gothenburg.

Krantz estimates that Sweden needs to double its current number of forensic medical experts to keep up with the demand for autopsies.

The issue isn’t money, but rather encouraging people to enter the profession in the first place.

“There are very few people who enter medical school with the intention of going into forensic medicine,” he said.

He admitted that there has been something of a “CSI-effect”, with an uptick in interest in forensics as a result of the popular US television dramas which depict the profession in a glamourous light.

“But it takes years for these young people to go through and complete their training. You can’t just buy a fully trained forensic specialist off the shelf,” said Krantz.

He fears as well that news of the tough working conditions for forensic medical experts in Sweden will dissuade would be candidates from pursuing a career in the field.

“This is a very difficult and long-term problem to solve,” he said.