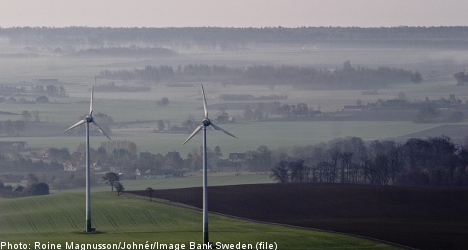 He believes that in certain cases, the national interest in renewable energy must take precedence over the autonomy of local governments, citing security issues.

“Here, we must change so that local authorities are not just listening to opinions and saying no without even trying to resolve conflicts. If it does not work, it may be necessary to remove the municipality’s veto power,” Carlgren told newspaper Svenska Dagbladet’s (SvD) website on Thursday.

Forestry companies and agriculture must shoulder the burden to address environmental problems as well, the minister added.

Carlgren wants the Confederation of Swedish Enterprise (Svenskt Näringsliv) to be a driving force in environmental work, become a partner in the development of new technologies and not be reluctantly dragged into it.

Within forestry, he wants companies to increase their nature conservation ambitions and not strictly rely on effective forest management, SvD reported.

In agriculture, he hopes producers will work more on nutrient problems and change farming practices to significantly reduce nitrogen emissions, as well as proposing a green tax to deter pollution.

Carlgren added that he believes the Centre Party has an aggressive environmental policy, but is also attentive to the needs of the poor and wishes to push the environmental debate beyond the “leftist hegemony” endorsed by the Green Party.