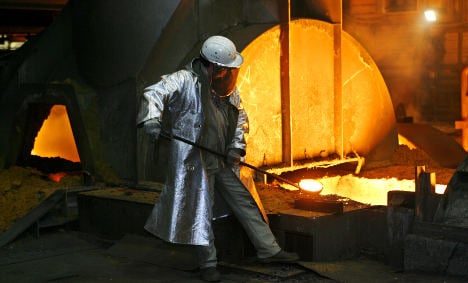 Gross domestic product (GDP) grew by 0.7 percent between July and September, Germany’s statistics office said, after a jump of 2.3 percent in the second quarter of the year, the best performance for 20 years.

The growth of 0.7 percent was slightly lower than forecasts by analysts surveyed by Dow Jones Newswires, who had expected growth of 0.8 percent. But it was significantly higher than the 0.4 percent delivered by France and bolstered hopes that Germany can prop up the eurozone.

Carsten Brzeski, from ING bank, said: “This year can still go down in the annals as the best growth year since German reunification” in 1990.

“Third quarter growth demonstrates that the German recovery is much more than a simple statistical quirk: the German economy is a good way towards a self-sustained recovery,” added the analyst.

When compared with a year earlier, at a time of economic crisis, German GDP rose by an impressive 3.9 percent.

“After the extraordinary growth in the second quarter, the German economy continued its dynamic upswing in the third quarter,” said Economy Minister Rainer Brüderle.

Significantly, the growth was broad-based, with both domestic and foreign demand making a positive contribution to the GDP figures.

Chancellor Angela Merkel has come under fire both from European partners and around the globe for not doing enough to boost domestic demand and relying too heavily on Germany’s world-class export machine.

The global downturn hit Germany, the world’s second-biggest exporter after China, especially hard as demand for its goods dried up. In 2009, it suffered the worst recession in 60 years with GDP contracting 4.7 percent.

However, as the rest of the world has recovered and started buying German products again, the economy has rebounded powerfully. Berlin expects growth of 3.4 percent this year, dipping to 1.8 percent in 2011.

And as the economy purrs, the jobless lines shrink, with the government and most economic institutes expecting unemployment to drop far below the psychologically important three million mark in the coming months.

“At first sight, the latest figure looks like a dramatic slowdown,” said Andreas Rees from UniCredit.

“However, there is no – repeat no – reason for being disappointed,” added the economist.

“The German one-engine economy solely driven by exports has been replaced by a more balanced one, thereby making the upswing more robust.”