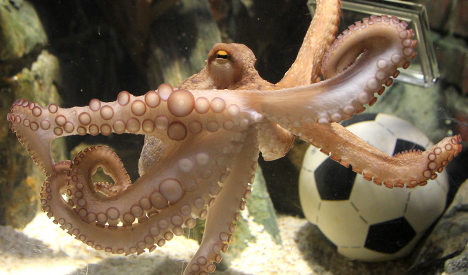 Paul was found dead in his tank Tuesday morning by “devastated” staff at the Oberhausen Sea Life Aquarium, a statement read. He died peacefully overnight, the statement added.

He was two years and 10 months old.

“Paul predicted his way into the hearts of audiences during the football World Cup 2010 and earned world fame as an octopus oracle,” the aquarium statement read.

Quick to head off any suspicions of foul play or neglect, general manager Stefan Porwoll, said: “He died peacefully in the night of a natural death. It is a comforting thought that he had a good life with us, with the best possible care by a dedicated team.”

Porwoll added: “Paul inspired people on all continents, as he correctly predicted, one after another, seven matches for the German national team as well as the final. He was dear to all our hearts and we will miss him painfully.”

Paul’s body is now in a refrigerator and is expected to be cremated in the next few days.

The aquarium will now erect a memorial “to honour Paul and on the basis of worldwide interest.”

The memorial will show the “most beautiful and moving moments.”

The urn containing Paul’s ashes will be put on display, as will the Perspex boxes in which the national flags of football teams were lowered into Paul’s tank for him to make his famous predictions.

Paul’s correct prediction of eight straight matches had one chance in 256. After the World Cup 2010, the aquarium was besieged by media and corporate requests for Paul to take a crack at everything from stock price movements to national elections.

More ominously, the Spanish town of Carballiño asked to borrow Paul for a few days during a major food festival.