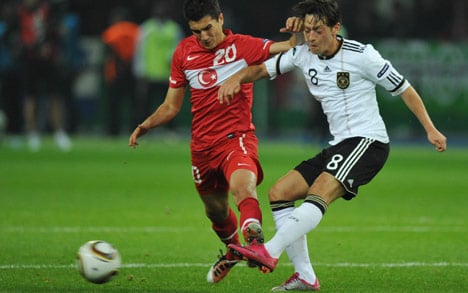 With a maximum nine points, Germany are in firm control of Group A while Guus Hiddink-coached Turkey are second and suffered their first defeat of the qualifying campaign.

“The team showed they really wanted this and we have earned a deserved victory,” said Löw.

Born and raised in Germany to Turkish parents, Özil, 21, was booed by boisterous Turkish fans who made up more than half of the 74,244-capacity Olympic Stadium crowd, but he silenced the jeers with a 79th-minute goal to seal the win.

His celebrations were muted, almost embarrassed, however, “out of respect for the land of my forefathers,” the midfielder said.

“Of course I was really happy. It was fantastic for me to score in this match. But I made the spontaneous decision not to overdo the celebrations,” he said.

He also managed to block out the boos from the Turkish crowd.

“I just shut it out and focused on the game. I just wanted to play the game and that’s what I did. The team and the German fans were a great support. “That makes me really happy.”

The hosts had taken the lead when veteran striker Miroslav Klose scored just before half-time and the Bayern Munich star slotted his second on 87 minutes.

Remarkably, Klose has yet to score a goal in the Bundesliga this season after seven matches, but he has now netted five times in three internationals already this season in Euro 2012 qualifiers.

The 32-year-old’s second just before the final whistle and was his 57th goal in his 104th international, passing Franz Beckenbauer’s mark of 103, to put him clear second behind Gerd Müller’s all-time record of 68 goals for Germany.

“I ask myself that every time: I have a bit of luck here which I am lacking with Bayern sometimes,” he said.

“Although I have now over-taken Franz Beckenbauer in terms of the number of international matches, but there will always be something special about the Beckenbauer name.”

There were only three changes from the team which beat Argentina 4-0 in the World Cup quarter-finals before finishing third and the Germans kept the Turks under constant pressure.

Germany made the brighter start with Klose and Özil having the best of the chances in the opening 15 minutes with both squandering clear chances to beat Turkey goalkeeper Volkan Demirel of Fenerbahce.

Besiktas’ Mehmet Aurelio was stretchered off after 22 minutes with what looked like a serious leg injury following a clash with Toni Kroos when the pair went for the ball and he made to make way for Stoke City’s Tuncay Sanli.

The opening goal came on 42 minutes and it was a Bayern Munich-inspired effort as defender Philipp Lahm swung in a cross from deep.

Munich’s Thomas Müller’s header was saved by Demirel, but clattered off the crossbar and Klose was on hand to header home after netting twice against Azerbaijan and once against Belgium in last month’s wins.

Turkey’s Eintracht Frankfurt striker Halil Altintop squandered a golden chance to put his side level on 53 minutes when he found himself one-on-one with Germany’s Manuel Neuer only to fire straight at the goalkeeper.

Likewise, Lukas Podolski wasted the perfect chance to make it 2-0 when he fired wide after the perfect pass from Ozil left him alone in front of goal on 69 minutes while Mueller fired at Demirel on 73 minutes.

Özil scored his third goal for his country with nearly ten minutes before Klose struck again to claim the three points.

In the next round of matches, Germany take on Kazahkstan in Astana on Tuesday bidding for their fourth win, while Turkey travel to Baku to play Azerbaijan.