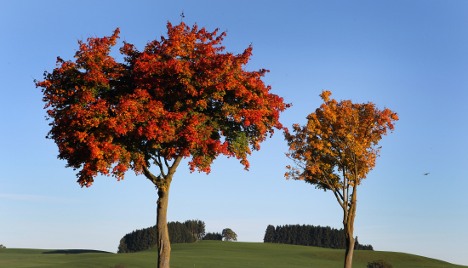 A high-pressure system is on its way to Germany, bringing sunshine for a crisp and bright autumn weekend, according to the German Weather Service (DWD).

The weather system, dubbed “Marcel,” will behave like a boxer, batting away less-pleasant weather patterns lurking around other parts of Europe, DWD meteorologist Simon Trippler said in a statement.

“The low pressure systems cavorting around the Atlantic have no chance of coming further east, Marcel is simply too strong and will effectively deflect the assailants like a good boxer,” he said.

While much of the country will be sunny, the air will be cooler and dryer, Trippler said, adding that there could be frost overnight in eastern and southeastern Germany.

Friday morning may dawn foggy is some locations, but should dissipate with sunshine by midday. High temperatures will range between 13 degrees Celsius in the north and 22 degrees in the west and southwest.

More fog is likely on Saturday morning, but sunshine will clear things up quickly again. Skies will remain mostly clear with highs slightly cooler than the day before, between 14 and 19 degrees.

Some regions will see isolated fog again on Sunday, but more sun and partly cloudy skies will arrive by midday. Temperatures will be cooler, though, with highs between just 12 and 18 degrees. Western regions should expect slightly milder temperatures, though, Trippler added.