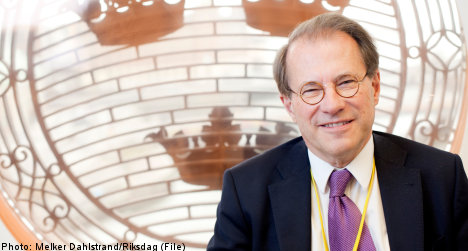 There were 347 ballots submitted in the vote, with 153 in favour of Kent Härstedt, and 194 for Per Westerberg. The result means that the Sweden Democrats, with their 20 votes, did not decide the outcome of the ballot.

“I am happy that he would have been elected even without the support of the Sweden Democrats,” said Anna Kinberg Batra, Moderate party parliamentary group leader, to news agency TT after the vote.

Susanne Eberstein of the Social Democrats, was confirmed without contest as deputy speaker, while the Green Party’s Ulf Holm won a landslide vote against the Sweden Democrats Mikael Jansson, to become second deputy speaker.

Liselott Hagberg completed the business of allocating the speaker posts with an uncontested appointment as the third deputy speaker.

Sahlin initially declared Per Westerberg to be the winner, but immediately announced that Sven-Erik Österberg had contested the result, and ordered a secret ballot.

Anna Kinberg Batra then introduced the Alliance candidate, sitting speaker Per Westerberg and noted that since 1976 it had been centre-right praxis to back the candidate of the largest bloc as the Riksdag speaker.

“Per Westerberg has been an member of parliament for 30 years. He has been minister, deputy speaker and speaker. He won respect across the political spectrum,” she said.

The Sweden Democrats had attempted to use the election to push the major parties to negotiate but neither the Social Democrats not the Moderates took up the invitation.

Sweden Democrats party leader Björn Söder explained while nominating Mikael Jansson as second deputy speaker, that it is the party’s policy to back the candidate of the largest bloc for the speaker post and confirmed that SD’s candidates had done so.

But with Per Westerberg claiming 194 votes, the votes of the Sweden Democrats were not required to confirm the Alliance candidate’s appointment and also means that one Red-Green member of parliament voted with the Alliance.

One of the members, Christina Höj Larsen, missed voting as she had left the chamber to go to the toilet when she her name was called. Danish-born Larsen tried to run down to register her vote, but was told that it was too late.

The members of parliament are called up to submit their votes in order, according to constituency allegiance.

The other abstention is accounted for by former justice minister Thomas Bodström, who is in the USA and had not appointed a replacement for Monday’s vote.