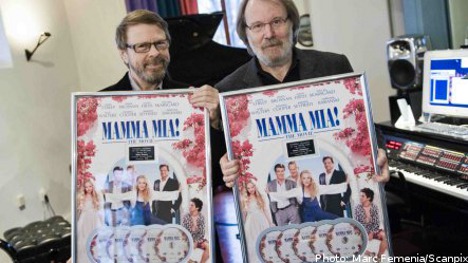 “They can bugger off,” Andersson told the agency.

Björn and Benny’s hit song Mamma Mia is the source of their anger after it given a revamp by the Danish People’s Party youth league in honour of the party leader, Pia Kjærsgaard.

The young nationalists amended the text to “Mamma Pia” and gave the leader a rousing rendition at the party congress, but declined to seek the permission of the Swedes first.

“Firstly, you can not just re-write songs as you like and secondly we want them to understand that we have absolutely no interest in supporting their party,” said Benny Andersson.

The multi-millionaire artists have now instructed their record company Universal to pursue legal action against the party.

Pia Kjærsgaard recently visited Sweden to support the campaign of the Sweden Democrats, speaking at a rally in Höganäs in Skåne. The party has been held up as something of a model for the party, but is not something that the former Abba stars want to be associated with.

“Abba never allows its music to be used in a political context. This is something that we have pointed out to the Danish People’s Party,” Andersson said to TT Spectra.