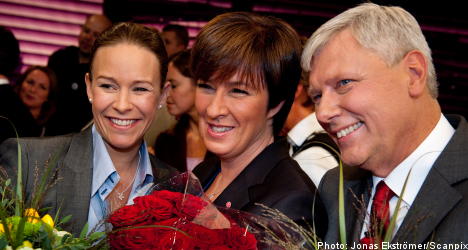 According to a Synovate poll published by Sweden’s leading daily Dagens Nyheter (DN), the ruling centre-right coalition led by Prime Minister Fredrik Reinfeldt garnered 49.2 percent of voter support, down 0.6 percentage points from the institute’s last survey a week ago.

Saturday’s poll thus indicated the ruling coalition, made up of Reinfeldt’s Moderates along with the Liberal, Centre and Christian Democrat parties, would win a narrow parliamentary majority, taking 175 of the total 349 seats in the house.

The poll of 1,820 people between September 7 and 16 meanwhile showed the leftwing opposition coalition, made up of the Social Democrats, the Greens and Left Party, garnering 42.8 percent of voter support, an increase of 1.9 points from the previous survey.

“It would be enough for the government to win just a few fractions of a percentage point less for their opportunity to create their own majority rule to disappear,” DN summed up the poll results.

It is vital for either the right or the leftwing blocs to win a clear majority in Sunday’s vote, observers say, since the far-right anti-immigrant Sweden Democrats appear likely to enter parliament for the first time.

Even with a handful of seats, the far-right party could play kingmaker in a tightly split parliament with minority rule, and, analysts caution, could even make it so difficult to govern that new elections would need to be called.

In Saturday’s Synovate poll, the Sweden Democrats garnered 5.9 percent of voter intentions, which marks a significant 1.6-point drop from the institute’s previous survey but is still well above the 4.0-percent barrier for entering parliament.

If the far-right party, which won just 2.9 percent of the vote in 2006, were to match the poll result Sunday, it would win 21 seats in the house.

A Sifo poll published in the Svenska Dagbladet (SvD) daily Saturday meanwhile showed the Sweden Democrats slipping below the parliamentary barrier to just 3.8 percent, while handing the leftwing opposition a full 45.3 percent of voter intentions, an increase of 3.3 points from its last survey.

A Demoskop poll published by the Expressen tabloid Saturday also showed the Sweden Democrats slipping slightly, but just 0.2 points from its previous survey to 5.1 percent.

That poll handed the government alliance a clear majority of 51.2 percent, compared to just 42.5 percent for the opposition.

US President-elect Joe Biden when he was US Vice President, and Chancellor Angela Merkel in 2013. Photo: DPA

There's an overwhelmingly positive view from the Bundesrepublik: nine out of ten Germans (89 percent) think it is “very good” or “good” that Biden won the recent US election.

In fact, only seven percent of those surveyed in the ARD Deutschlandtrend representative poll rate the election result as “not so good” or “bad”.

And a massive 80 percent of respondents to the representative survey believe that German-American relations will improve with Biden when he takes over as US President early next year.

It's a huge contrast to how Germans felt after the election of Donald Trump in 2016: at that time, 57 percent expected German-American relations to deteriorate.

A recent poll showed the worry is still strong. Trump took the top spot this year as the greatest source of German fear for the second time since 2018 in the survey conducted by insurance firm R+V. A total of 53 percent said they believe his policies make the world a more dangerous place.

What do Germans think about Biden's proposals?

Biden's initial plan for the period after he comes office is also supported among Germans, according to the ARD survey.

These include the USA returning to the World Health Organisation and re-entering into the Paris Climate Agreement – something that 9 out of 10 Germans support.

Respondents also expect improvements for the domestic situation in the US: 90 percent support Biden's desire to develop an action plan as quickly as possible to control the coronavirus pandemic in the states.

READ ALSO: 'The world may respect us more': How Americans in Germany reacted to US elections

Unclear if Biden can make changes

A total of 85 percent of Germans believe that the USA will develop positively overall under Biden.

However, they also see possible limits to his actions: whether Biden can actually initiate major reforms also depends on what the majority balance in Congress will be like in the future. And whether the Democrats will be in the minority in the Senate or whether they will take control.

That will be decided in the January runoff election in the state of Georgia. There, two seats for the Senate are still at stake. If the Democrats are able to win them, they could be able to take control of the Senate.

But that is not yet the case – and currently 71 percent of Germans think that Biden will not achieve many of his goals because he is dependent on cooperation with the Republicans.

On another important issue – the reconciliation of the nation – Germans are cautiously optimistic: 56 percent trust Biden to overcome the divisions in US society.

German Chancellor Angela Merkel earlier this week congratulated Biden on his election win. She said Germany would stand with the US to tackle global problems.