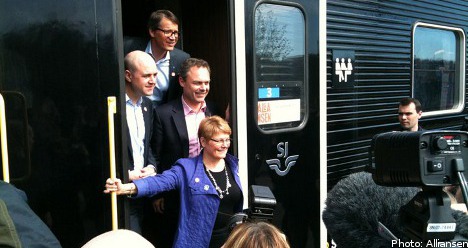 The Alliance claimed the support of 50.5 percent of the electorate in the poll, with the Red-Greens on 44 percent.

The Social Democrats declined by 0.9 percentage points to 29.7 percent, their lowest figure on record. The Green Party, long the force giving buoyancy to the Red-Green coalition in the polls, dropped 0.4 points to 8.5 percent.

Lars Ohly’s Left Party was the only bright spot for the opposition, adding 1.1 points to rise to 5.8 percent.

The Moderates declined slightly and can thank its smaller coalition partners for the Alliance majority in the poll which was completed last Wednesday.

The Liberal Party (Folkpartiet) advanced 0.5 percent to 7.5 percent, while the Centre Party advanced 0.9 percent to 6.2 percent. The Christian Democrats gained some breathing space from the threshold for parliamentary seats, coming in at 4.9 percent after a 0.2 point climb.

“One could presume that sympathy voting has started to become established,” said Anders Lindholm at Demoskop to the newspaper.

The far-right Sweden Democrats fell 0.3 percent to 4.2 percent, marginally above the threshold for parliamentary seats.

Demoskop’s opinion survey interviewed 1,101 people from August 25th to September 1st 2010 and posed the question: Which party would you vote for if an election were to held today?