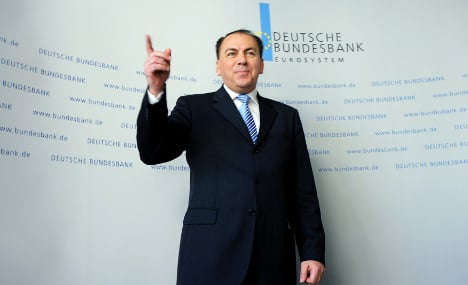 Weber, a leading candidate to take over as ECB head next year, told Bloomberg television Europe’s monetary authorities should help commercial banks make it through the end of the year before deciding when to withdraw exceptional measures taken to support them through the crisis.

“Most of these discussions about the continuation of the exit I think will be focused on the first quarter” of 2011, Weber said.

That suggested the ECB would continue for now to provide commercial banks with a full allotment of their bids for central bank loans.

But Weber added: “It’s clear that we need to re-embark on a normalisation procedure” to gradually get the eurozone banking system back to where it was before the global financial storm broke in August 2007.

His comments went further than others by ECB president Jean-Claude Trichet in suggesting the central bank would support banks for longer than some analysts have assumed.

But they also showed the ECB felt the 16-nation eurozone was getting to grips with its economic and financial crisis, whereas the US Federal Reserve recently voiced caution about an uncertain US economic recovery.

Germany is leading a eurozone rebound after posting record growth of 2.2 percent in the second quarter but Weber stressed that “we are in year four of the crisis and the markets are still fragile.”

Meanwhile, the 53-year-old German central bank governor was asked if he was diplomatic enough to head the ECB after Trichet steps down in October 2011.

“It’s important to be a diplomat for the diplomatic corps, it’s not so important for a central bank,” Weber said.

He is considered a policy “hawk” due to a consistent focus on battling inflation but some observers say Weber might lack the sense of consensus attributed to another candidate, Italian central bank governor Mario Draghi.

“I think it’s very important for central banks to be clearly focused and also, if necessary, to deliver undiplomatic messages to governments,” Weber said.

Barclays Capital analyst Julian Callow said that “Weber’s views concerning the full (loan) allotments might also be influenced by his desire to position himself as the successor to Mr. Trichet as ECB president.”

Weber declined to discuss the issue directly, saying: “We should focus all our energy and attention on solving the economic problems that we face.”

But Callow felt Weber’s remarks were noteworthy since “he is pre-empting the discussion that was meant to be scheduled for the next (ECB) policy meeting,” and “might perhaps be an irritation” to Trichet.

“We agree that we disagree,” Roger Klokset, from the Norwegian pilots’ union, said at lunchtime outside the headquarters of the Confederation of Swedish Enterprise in Stockholm, where talks are taking place. “We are still working to find a solution, and so long as there is still some point in continuing negotiations, we will do that.”

Mats Ruland, a mediator for the Norwegian government, said that there were “still several difficult issues which need to be solved”.

At 1pm on Friday, the two sides took a short break from the talks for lunch, after starting at 9am. On Thursday, they negotiated for 15 hours, breaking off at 1am on Friday morning.

READ ALSO: What’s the latest on the SAS plane strike?

Marianne Hernæs, SAS’s negotiator on Friday told journalists she was tired after sitting at the negotiating table long into the night.

“We need to find a model where we can meet in the middle and which can ensure that we pull in the income that we are dependent on,” she said.

Klokset said that there was “a good atmosphere” in the talks, and that the unions were sticking together to represent their members.

“I think we’ve been extremely flexible so far. It’s ‘out of this world’,’ said Henrik Thyregod, with the Danish pilots’ union.

“This could have been solved back in December if SAS had not made unreasonable demands on the pilots,” Klokset added.

ECONOMY
What’s in store for the Swedish economy in the second half of 2021?
Url copied to clipboard!