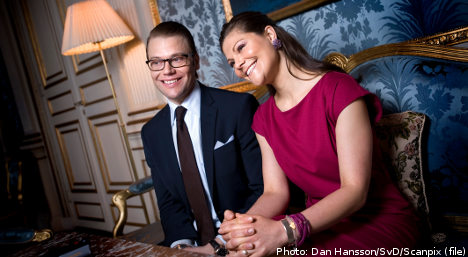 “The Crown Princess has inherited her position and it would therefore not seem relevant to compare her duties to those of someone who had been elected or appointed to carry them out,” Chief Prosecutor Gunnar Stetler wrote in a decision released on Friday morning.

“There is no reason to believe that a crime subject to public prosecution has been committed. An investigation will therefore not be commenced,” Stetler added.

Stetler also said that no investigation would be launched into the conduct of Bertil Hult, who lent the royal couple a plane, a yacht and a house for their honeymoon. Crown Princess Victoria and Prince Daniel flew to Tahiti on his Dassult Falcon 7X private jet, sailed on his yacht in the Pacific Ocean, and reportedly spent several weeks at his house in Colorado.

A number of complaints were made to prosecutors by members of the public, and at the beginning of August Stetler announced that he would consider whether the royal couple and Hult had a case to answer.

Hult is the billionaire founder of EF, a multinational company that organizes language-learning trips.

The Royal Court has previously dismissed criticism of the honeymoon:

“It was a private trip and a wedding present from an old friend of the Royal Family,” Ulrika Näsholm, information secretary to the Royal Family, said when the initial complaints were made public.

Sweden’s Royal Court announced that Prince Daniel had tested positive in a press release issued on Sunday, while Crown Princess Victoria’s second infection was revealed in another release on Saturday.

The royal couple, who are both fully vaccinated, first tested positive for the virus in March last year, and have only mild symptoms.

According to the press releases Prince Daniel was suffering “very mild symptoms and feels well”, while Princess Victoria has “the symptoms of a cold but otherwise feels well”.

The couple are both now isolating in Haga Palace in the north of Stockholm, where they have lived since 2010.

Sweden’s King Carl XVI Gustaf and Queen Silvia, who are triple-vaccinated, both tested positive on Tuesday. The couple are now symptom-free, but are continuing their isolation at Drottningholm Palace to the west of Stockholm.