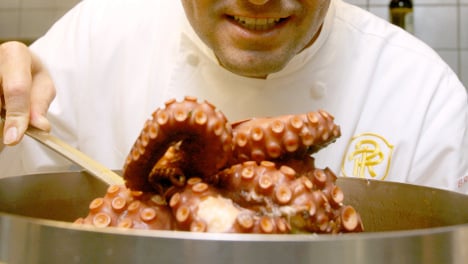 The town in Galicia, an autonomous region in Spain’s northwest, is even asking to borrow Paul for a few days during a major food festival.

Carballiño, with a population of 14,000, insists it wants to thank “Pulpo Paul” for correctly predicting the Spain’s winning of the football World Cup this summer.

The decision to honour the world’s most extrasensory invertebrate, whose fame spread after he correctly predicted the results of a string of World Cup matches, was made unanimously by the city council, the Spanish media reported on Tuesday.

Mayor Carlos Montes plans to travel to Oberhausen, where Paul lives at the Sea Life Centre aquarium, to personally deliver the honour to the eight-legged oracle.

The award consists of a see-through box similar to those used to elicit Paul’s predictions, only with Carballiños’ coat-of-arms – though it was not clear whether this would be dropped in the tank or merely held up to the glass.

Pressing his luck somewhat, Montes also plans to ask the aquarium if he can borrow Paul for a few days to exhibit him in a tank at a Carballiño food festival on August 8. He vowed the octopus would be carefully transported and adequately housed.

“Germans need not fear, we don’t plan to eat Paul,” said Manuel Pazos, the owner of a fish factory in Carballiño. Pazos has already offered €30,000 to buy the oracle in order to attract tourism to the town. Now he is adding an extra €5,000 “for the goal by Andrés Iniesta in the final.”

Calamari is the traditional dish of Galicia. The best-known variety is pulpo á feira – cooked squid seasoned with red paprika and coarse salt, served with a good dash of olive oil.