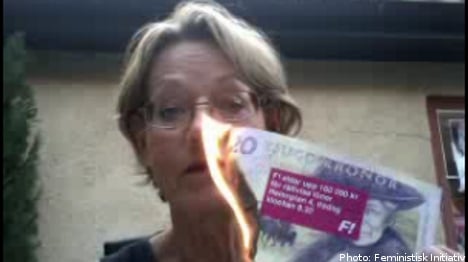 “This is to be done as a demonstration for equal and fair pay between women and men,” a statement on Fi’s website states.

The website features a film clip of party leader Gudrun Schyman telling the camera: “Fi’s party members are busy handing out 20 kronor notes around Almedalen. On the notes there is a tag which reads Hamnplan, Tuesday 8.30am”, referring to the time and place for the somewhat unorthodox political manouver.

Schyman invites viewers to come down to Visby harbour and join in, before setting alight to a 20 krona note.

“See you there,” Schyman says at the end of the film.

The Feminist Initiative has previously made no secret of the problems of raising campaign finance and have often taken to slightly unorthodox methods to continue their work.

Prior to the last election their advertising budget received a timely boost from Skåne businessman Claes Decker, and just prior to the 2009 EU elections Fi received a further million from former Abba star Benny Andersson.

Andersson’s donation enabled the party to take out last minute full page advertisements in national newspapers, a move that was credited with their vastly improved 2.2 percent showing in the election.

The party courted controversy when they received a 400,000 kronor grant in 2007 from a state body distributing grants for gender equality projects. In order to obtain the grant the party had to state that it was not a political party and would not contest an election during the year. Conveniently for Fi there were no elections in 2007.

The source of the money for Fi’s latest headline-grabbing stunt was not disclosed by the party in its Monday statement. One thing seems certain however, controversy will not be far from Hamnplan in Visby at 8.30am on Tuesday.