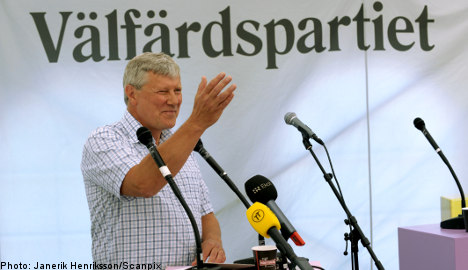 “Our V [from Vänsterpartiet] today stands for the Welfare Party [Välfärdspartiet],” Ohly told SvD.se on Monday. “We want to create the world’s best welfare system without profit interests. This is our most important election issue.”

Ohly sees his party as welfare’s strongest defenders, even against its coalition partners, the Social Democrats and Green Party.

While the Left Party gains some credit for its ideological consistency, its party leader remains a problem, according to a media and public opinion analysis from Retriever and Synovate which indicates that party could gather the votes of only one in 20 in the autumn election.

The news comes as the Left Party kicked off Almedalen Week (Almedalsveckan or Politikerveckan i Almedalen) with its name change announcement, stating that while the official name will only last a day, it wants to be known as the “Welfare Party” for the duration of the election campaign.

Almedalsveckan is an important annual political event in the first week of July described as a “rock festival for politics” that takes place in and around Almedalen, a park in Visby on the island of Gotland. This year, the autumn election campaign unoffically kicks off here.

In launching the novel initiative, Ohly also took the opportunity to attack the government. In the last two years, at least 25,000 jobs have disappeared into welfare, Ohly said. He also singled out unemployment, labour market exclusion and a lack of jobs for young people.

“It is a gigantic failure,” he said.

According to the Synovate survey, the best thing about the Left Party is that it champions the disadvantaged and supports gender equality, according to both current and potential voters.

However, voters in general are more skeptical about the Left Party than the other parties. To win new voters, the party must change its fiscal ideology, as well as its party leader the report argues.

“The media and voters agree that Lars Ohly is problematic,” wrote Kajsa Bergvall, chief analyst at Retriever, in the report.

Three of four voters do not see the party as an alternative, lower than the figures for the other parties on average.

Like other parties with low poll numbers, the Left Party is fighting a strong headwind. The party has attracted some attention recently for its foreign and defence policy, especially after it called on Sweden to leave Afghanistan.