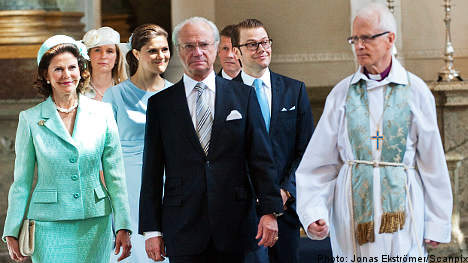 The church service is to be followed by the first of four pre-wedding receptions at the Royal Palace.

The palace also announced that Westling is to be granted the title His Royal Highness, an honour that will be formally bestowed on his wedding day.

Victoria’s former gym instructor will also receive the titles Prince of Sweden and Duke of Västergötland, the palace said.

Raising Daniel to the rank of HRH gives him the same status as other senior members of the Royal Family such as Prince Carl Philip, Princess Madeleine and Princess Lilian. Other members of the family, such as the king’s sisters, Princesses Margaretha, Desirée and Christina, lost the rank after marrying commoners.

There is no recent precedent in Sweden for the king to follow when deciding Daniel’s title, as Crown Princess Victoria is set to be the country’s first reigning queen since Ulrika Eleonora in the eighteenth century. But in other European monarchies, husbands of queens or female heirs to the throne have been awarded the title HRH, such as in the case of Prince Henrik of Denmark or Britain’s Prince Phillip.

ROYAL
King of Sweden celebrates 75th birthday with only a modest amount of pomp
Url copied to clipboard!