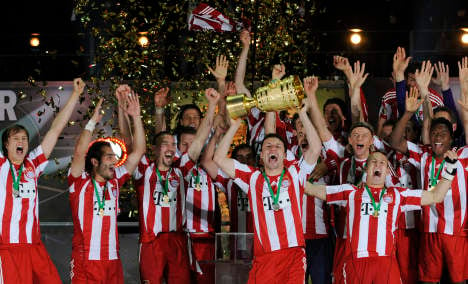 
Franck Ribery grabbed one of the goals as Bundesliga champions Bayern Munich stayed on course for the treble with a 4-0 win over 10-man Werder Bremen in the German Cup final in Berlin on Saturday.

Ribery scored his first goal for nearly two months after a difficult few weeks for the 27-year-old, who is due to hear on Tuesday if he is banned for next Saturday’s Champions League final against Inter Milan.

The French international has kept a low profile since being questioned by police over his involvement in the under-age call-girl scandal, which has

“The result shows how important this game was to us,” said Bayern defender

Philipp Lahm. “We still have business to attend to, but we certainly want to win the treble, that was clear to see today.”

Having won the Bundesliga last weekend with a 3-1 against Hertha Berlin, Bayern were back at the capital city’s Olympic Stadium for the second phase of their treble quest and Louis van Gaal’s claimed their 15th German Cup crown.

After Dutch winger Arjen Robben hit a first-half penalty, Croatia striker Ivica Olic stabbed home the second before Ribery hit the third to settle the tie, before Bremen captain Torsten Frings was sent off on 77 minutes.

Having earlier been heavily fouled by Frings, Germany midfielder Bastian Schweinsteiger had the last laugh with the final goal to seal the rout on 83 minutes.

Robben, who has scored 23 goals this season including 16 in the Bundesliga, nearly opened the scoring after three minutes when he smashed in a long-range shot and Bremen goalkeeper Tim Wiese just managed to tip the ball over the bar.

Bayern captain Mark van Bommel earned himself a yellow card after just 11 minutes when he scythed down Tim Borowski, sending the midfielder tumbling to the sodden turf in a wave of spray after heavy rain in the German capital.

The opening was played at a frantic pace and having gone close twice, Robben opened the scoring on 35 minutes when Germany defender Per Mertesacker handled the ball and the Dutchman planted his penalty kick in the bottom right-hand corner.

Bremen coach Thomas Schaaf switched attacking midfielder Aaron Hunt for striker Hugo Almeida immediately after the break, and he created two chances in the first two minutes of the second-half.

But Bayern put one hand on the cup on 51 minutes when Olic stabbed home his shot after Mertesacker headed on to Munich’s Daniel van Buyten, whose pass to Olic was drilled into the back of the net.

Ribery made sure of the league and cup double when he took a pass from Van Bommel and, having gone one-on-one with Wiese, drilled his shot past the Bremen goalkeeper into the empty net.

Frings was shown a second yellow card after he clattered Germany midfielder Schweinsteiger to earn the red on 77 minutes. Schweinsteiger had the last laugh when he controlled a chip and slid his shot around Wiese for the fourth on 83 minutes.