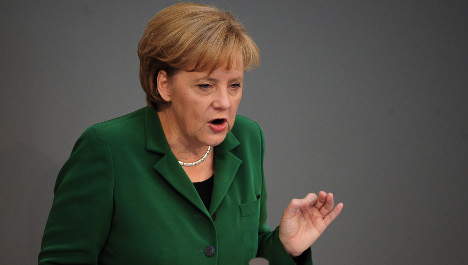 “The future of Europe and the future of Germany within Europe is at stake,” Merkel said in parliament in a debate on Berlin’s unpopular decision to lend €22.4 billion ($29.1 billion) in taxpayers’ money to Greece.

Merkel defended the aid package and said Europe was looking to Berlin for leadership out of the crisis.

“No decision is possible or will be possible without us or against us,” she said. “All of Europe is looking to Germany.”

She also rejected accusations her government had dragged its feet over the Greek bailout, saying providing aid before Athens had announced extra austerity measures would have been counter-productive.

“We would never have got the necessary programme from Athens if Germany had approved the aid earlier without sufficient guarantees, as nearly everyone was demanding,” Merkel said.

“A good European is not necessarily the one who helps quickly. Much more it is someone who sticks to European treaties and national laws and who makes sure that the stability of the eurozone and of all of Europe sustains no damage.”

But she admitted the EU’s Growth and Stability Pact governing member states’ budget deficits and debt had to be changed as a “lesson” of the crisis.

“The task of my government, and all members of this house today, is to make sure that this stability pact is adhered to, to defend it and to further develop it, as a lesson of this crisis,” Merkel said.

On Sunday, eurozone nations agreed to offer a loan package to Greece worth €110 billion over three years, with the IMF providing €30 billion. Merkel’s cabinet signed off on Berlin’s share on Monday and the parliament is expected to back the deal this week.

But Germany has been accused at home and abroad of exacerbating the crisis by not agreeing sooner.

“You drifted around like a windsock. Then in retrospect you call that your strategy,” Frank-Walter Steinmeier, parliamentary head of the opposition Social Democrats (SPD), told Merkel in parliament on Wednesday.

“Your double game has cost us an enormous amount of trust and respect in Europe,” said Steinmeier, who until last year was foreign minister.

Merkel was speaking as special legislation needed before the aid can be disbursed got its first reading with the aim of it hitting the statute books on Friday. It may then be challenged in Germany’s top court.

Facing strong public opposition, parliament is still expected to approve the bill despite grumblings from the SPD. Merkel said Germany’s reputation in in the 27-nation bloc was on the line.

“We are defending our currency,” she said.

Merkel said there should be tougher penalties against member states that break the rules, suggesting that Germany was ready for a fight with its EU partners to push through the changes.

“We are at a crossroads. The Greek crisis has brought it home to us in drastic fashion what a lackadaisical budget and financial policy can lead to,” she said.

Axel Weber, head of the German central bank, the Bundesbank, told parliament he supported such changes in order to create “incentives for solid budget policy.”