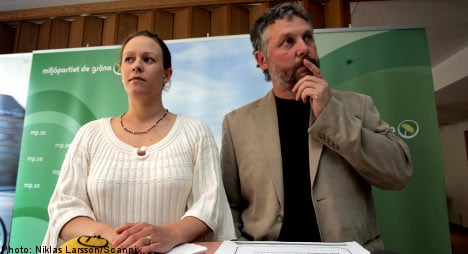 The gap between the left-greens and the centre-right Alliance parties has narrowed by 6.6 percent points to only 2.8 points over the past month as the parties start to develop their manifestos for the upcoming autumn elections.

The Green Party is the biggest loser in the new poll, shedding almost 25 percent of its support from the previous survey, falling 2.7 percentage points to 7.6 percent.

The centre-left coalition’s long-term opinion poll problem child, the Left Party, rebounded in the Demoskop poll, from 3.8 percent to 6.2 percent – a good margin above the four percent threshold for parliamentary seats.

“I think that this is a movement that can prove to be a trend eventually,” Left Party leader Lars Ohly told the newspaper.

The newspaper forwards the view that the mixed fortunes of the Left and Green parties can be explained by last weekend’s televised party leader debate.

While Lars Ohly was widely considered to have put in a strong showing, the Green Party deployed Peter Eriksson instead of Maria Wetterstrand – the more popular of their two spokespersons.

The poll indicates a slight fall for Mona Sahlin’s Social Democrats, backing 1.9 points to 35.2 percent, only 0.2 points from their historically low showing in the last general election in 2006.

“This reflects the fact that we now have a situation in the political debate where two alternatives increasingly stand in opposition to each other,” said Per Schlingmann of the Moderates.

Of the smaller government parties, the Christian Democrats and the Centre party could draw some comfort from the Demoskop poll with their support climbing by 0.9 points to 4.8 percent, and by 2 points to 5.1 respectively.

Jan Björklund’s Folk Party dropped by a point to 6.4 percent, this week’s media focus around the appointment of Birgitta Ohlsson as Minister of EU Affairs coming too late to impact the poll.

The latest poll indicates that there is no clear trend in Swedish politics as the election race moves off the starting blocks.

Demoskop conducted 1010 telephone interviews between January 27th and February 3rd 2010, asking respondents which party they would vote for if an election were held today.