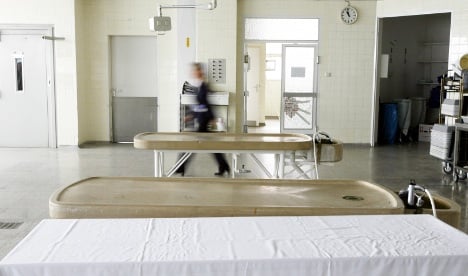 The man, who hailed from Gülzow in the northern state of Schleswig-Holstein, remains in the Klagenfurt district hospital morgue despite appeals to the family. Austrian officials say the awkward situation is a first for them.

After weeks of uncertainty, the community of Techelsberg has offered to pay for the man’s cremation.

“Tomorrow we have an appointment with a lawyer with whom we will document that the relatives have given their consent for a cremation in Austria,” said Helmut Pirolt from a burial service in Kärnten.

The 40-year-old truck driver died of what was believed to be a heart attack at a Techelsberg motorway rest stop. But when the community contacted the man’s father about having the body sent home across the border, he refused due to cost concerns.

“It’s an official passage, one can’t simply do it alone,” Pirolt said. Relatives would be required to hire an undertaker to take the body some 1,200 kilometres, which he estimated would cost about €3,500 alone without burial expenses.

“The relatives just weren’t willing to take this on,” he added.

But after the body is cremated by Techelsberg the man’s relatives will have a more affordable option to bring him home – they can pay about €2,000 to have him transported to Germany in an urn.

“Sending is then much easier with registered mail,” Pirolt said.