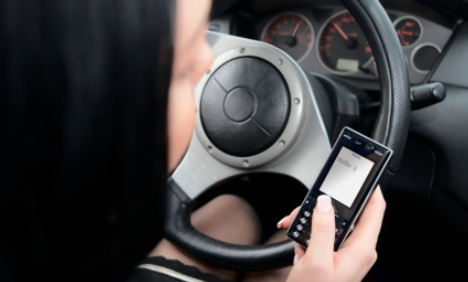 “This is the most dangerous thing of all that you can do in the car. You must be extremely intoxicated to pose as much risk as you do while texting,” Claes Tingvall, head of traffic safety at the Swedish Road Administration (Vägverket), told the TT news agency.

The worst offenders are drivers between the ages of 15 and 34, of which 46 percent sometimes use their mobiles while driving. The majority are male.

But 64 percent of drivers never use the SMS function when they are behind the wheel.

The statistics come from a web survey conducted by Sifo, which polled 3,331 people in cooperation with mobile network operator Tele 2.

“If you look away from the road for more than 1.5 seconds, the risk of an accident increases greatly. But even more so with texting,” Tingvall said.

The Internet survey clearly shows that those who can’t help but send and read text messages are aware that they are taking risks, and risking others’ lives. Ninety-five percent answered a question about whether or not texting influences driving ability in the affirmative.

Many don’t seem to have much faith in their fellow drivers as 39 percent believe that others often write or read text messages when they drive. But just 2 percent reported that they do it often.

Another indication that almost everyone believes that one shouldn’t use mobiles while driving is that 85 percent said it feels unsafe to ride with someone who is reading or writing text messages.

A similar poll conducted by Gallup in 2008 reported that less than 21 percent wrote text messages while behind the wheel and 12 percent read them. Similar to the Sifo survey, the offenders were predominantly young. Almost 40 percent of those between 18 and 29 read text messages and 26.4 wrote them while driving.

Research done by Vägverket shows that reaction time can be 40 percent slower while talking on the phone and even more so while texting.

It is prohibited to write and read text messages while driving even if the law doesn’t directly prevent the use of mobile telephones. Those who are a menace on the road due to mobile phone use can be convicted of careless driving.

Vägverket is in favour of a more explicit regulation, similar to that found in other European countries.

“We have submitted a proposal to the (Swedish) government as to how a law might be formulated. That was a year and a half ago. What has happened with it, I don’t know,” Tingvall said.

Morgan Olofsson, communications chief for MSB, Home Minister Mikael Damberg and Digital Minister Anders Ygeman announce the texts at a press conference on Friday. Photo: Jessica Gow/TT
“We are now in a difficult situation ahead of Christmas and New Year and we want to give the Swedish people yet another reminder,” Sweden's home minister Mikael Damberg said at a press conference announcing the mass text on Friday morning.
Sweden's Public Health Agency last Tuesday issued new guidelines which come into force on Monday December 14th, requesting that people in Sweden limit their socialising over the festive period if possible to a bubble of eight people, avoid new contacts, meet outside as much as possible, and avoid public transport as much as possible.
READ ALSO: What do Sweden's new recommendations mean for the Christmas season
The mass text messaging is being done together with Sweden's four biggest telecoms operators, Telia, Tele2, Telenor and Tre. According to the TT newswire, there are about 22 million mobile phone contracts in the country of 10 million people.
“They have come forward voluntarily to help carry this out practically. They are performing an important service to reduce the spread of infection in Sweden,” said digitalisation minister Anders Ygeman.
The text in the SMS, in Swedish, will read: “Information from the authorities: Follow the new tighter advice in order to stop the spread of infection. Read more on the Krisinformation website.”
It will not itself mention any of the actual recommendations for Christmas, instead enjoining recipients to go online and check up on what they are.
At the press Damberg reiterated that, although there are no fines or other sanctions for not following the recommendations, they should not be seen as voluntary.
“The recommendations from the agencies aren't some kind of tips for the public — they should be followed,” he said.
At the press conference Morgan Olofsson, the crisis preparedness agency's communication chief, said that the text messages “obviously and unfortunately” could only be sent out in Swedish and encouraged Swedes with an immigrant background and good Swedish language skills to translate the message for those who understand Swedish less well.
“We think this way — if all of you who read this message, if you help, in your language to the extent that you can, to  spread the message further, then everyone will understand how serious the situation is, and that way we can save lives,” he said.
The Krisinformation website itself contains links to information about the coronavirus in Sweden in other languages, which you can find here. The Local has also published a Q&A about what the rules mean in English.