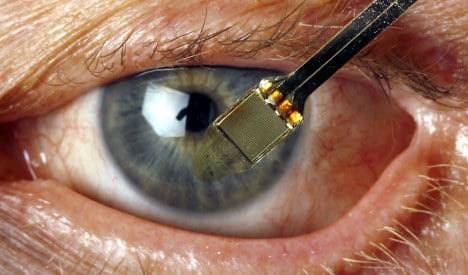 The medical researchers at the University of Tübingen in the southern State of Baden-Württemberg have managed to help blind patients read printed words and recognise objects using the pioneering technique.

In a preview of its Monday edition, Spiegel quoted the medical team as saying that one patient, a 45-year-old Finnish patient named Miika, had improved to such an extent that he was no longer considered legally blind.

“With Miika, we can show that, with the help of the optical prosthesis, he has crossed the boundary beyond which he is no longer regarded as legally blind,” said the research leader, Eberhart Zrenner.

The technique involves grafting tiny microchips, measuring 3mm by 3mm and housing more than 1500 photo cells, onto the patients’ retinas.

“The body tolerates the implant well,” said Zrenner. “We haven’t seen any serious problems such as inflammation.”

However the optical chips had to be removed after a few weeks according to the requirements of the university’s medical ethics committee.

Zrenner, who has founded a company called Retina Implant, told the magazine that in the coming year his team could fit about two dozen patients with new, wireless chips that could stay permanently under the retina.