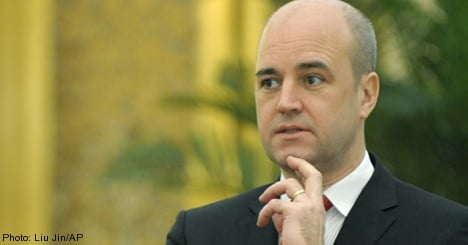 According to Anders Lindholm, CEO of Demoskop, there is a link between the Moderates drop in popularity and the ongoing debate about the treatment of immigrants in the Moderate-controlled Vellinge municipality in the south of Sweden.

But Moderate party secretary Per Schlingmann does not agree there is a connection between the two.

The four parties of the ruling centre-right block scored 44.3% of the votes in the poll while the red-green block took 50.3%. 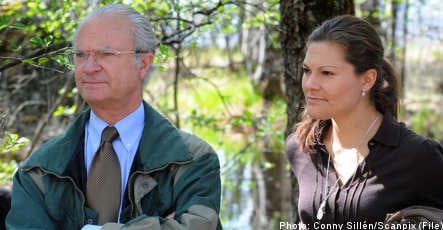 A full 59 percent of Swedes want the king to step down within the next 10 years, while only 29 percent think he should reign until his death, according to a Demoskop poll published in the Expressen daily.

The Internet poll conducted Friday of 620 people also showed that while 73 percent of those questioned said they had much or very much confidence in Victoria, only 39 percent said the same thing about her father.

Thirty-two percent of people polled said they had little or very little confidence in the king, compared to just nine percent for the crown princess.

The king reached the official retirement age of 65 last month but has said he has no plans to abdicate in favour of his 33-year-old daughter.

The latest poll confirms opinions seen in other recent surveys and comes just days after commercial broadcaster TV4 claimed it had viewed pictures of the king in a strip club in the same shot as two women having sex.

TV4’s report came as a new book said friends of the king had been willing to pay large sums of money to block the publication of pictures of him in compromising situations.

At least one of his friends reportedly contacted an alleged mafia boss to ask for help to negotiate with the strip club owner and stop him from making the pictures public.

The royal court in Stockholm told AFP Saturday it has demanded that TV4 show the pictures detailed in its report.

“TV4 must show what it is they are talking about. Where’s the substance? For now, as far as I can tell, there is no substance to this,” court information chief Bertil Ternert said, adding that the report had put him in the “impossible situation … of being asked to react to something we have not seen.”

“There needs to be some form of justice here. You cannot just attack the royal court and the king without disclosing what the substance is,” he insisted.

The latest reports come just over six months after a tell-all biography of the king hit the bookstands, causing uproar with its descriptions of his participation in wild parties and affairs with young women.

The claims have also surfaced less than a week after the court announced that Carl XVI Gustaf’s wife, German-born Queen Silvia, had launched an investigation into the nature of controversial ties between her father and the Nazi regime.

That probe comes on the heels of another investigative report by TV4 that Silvia’s father, whom she had previously insisted was not politically active although he was a member of the Nazi party, had taken over a German factory belonging to a Jew in 1939 as part of an “Aryanisation” programme.