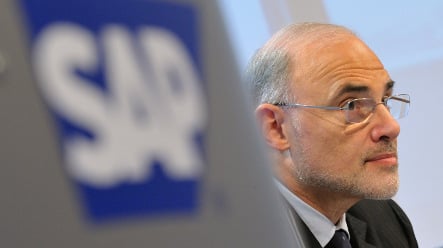 “In the next 10 years, I see lots of good things ahead for SAP,” he said, while cautioning against unbridled euphoria. “The economic crisis isn’t over yet,” the head of the German software giant said. “But I think the worst is behind us.”

He said the company was looking to purchase other companies that would complement and add value to SAP’s business. He rejected speculation, however, that US technology firm IBM could snap up the software company based in Walldorf.

He said the world leader in business software is reworking its operations to keep up with rapid changes in the information technology sector. Innovations include partnering with chip manufacturer Intel to develop new in-memory databases with increased storage capacity and access that is 10,000 times faster than with current models.

Apotheker said the company’s ultimate goal is making SAP products simpler and faster. In the future, customers should be able to decide whether to rent or buy the license to the company’s software.

Moreover, the company has worked to address problems with the launch of SAP’s new “Business by Design” software, which was repeatedly postponed: “We see a bright light at the end of the tunnel,” Apotheker said. SAP plans to release a detailed schedule for introduction of the software by early next year.

The company’s CEO has implemented a strict cost-cutting programme to help SAP along a path to recovery in the midst of the economic crisis, which saw the company make more than 3,700 layoffs. But Apotheker said there are no plans for another round of job cuts.

PARTNER CONTENT
Swedish for Programmers: Three languages for the price of none