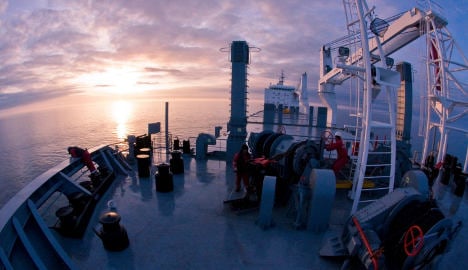 This week the Beluga Group announced that its ships the Beluga Fraternity and the Beluga Foresight had completed the most difficult and dangerous part of the trip, completing the trip from South Korea, via Vladivostok to Novyy Port in the Siberian town of Yamburg.

The ships are carrying elements of a power plant, which will be unloaded in Yamburg before the vessels continue their journey via Murmansk into central Europe, ending up in Rotterdam, Holland.

“We are very proud and delighted to be the first western shipping company which has successfully transited the legendary Northeast Passage and delivered this sensitive cargo safely through this extraordinarily demanding sea area,” Niels Stolberg, CEO of Beluga Shipping in Bremen, said in a statement.

He received word from the ships captains Aleksander Antonov and Valeriy Durov that they had dropped anchor in Novyy after passing through the East Siberian Sea, the Sannikov Strait and the Vilkizki Strait – the latter stretch accompanied by a convoy of Russian ice-breakers.

Beluga Shipping says it is planning further journeys through the Northeast Passage for next year.

The successful journey may be a cause for celebration among mariners, but it is seen with alarm by those monitoring climate change.

She added, “This is not a cause for celebration but cause for immediate action.”

PARTNER CONTENT
Mayor of Stockholm: ‘We want to be the impact capital of the world’
Url copied to clipboard!