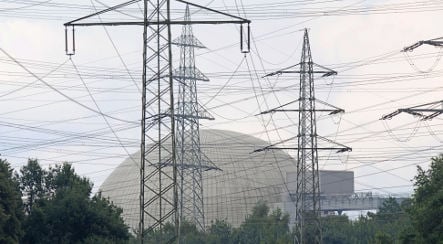 The Emsland reactor in northwest Germany, which supplies around 3.5 million households, underwent an automatic shutdown at 3:00 am (0100 GMT), RWE said in a statement.

“We are looking into what activated the security system,” a spokesman for RWE Power, a unit of RWE, told AFP. “At the moment we don’t think that the disconnection will last more than two days.”

In early July, the Krümmel reactor near Hamburg was shut down after problems – not long after it had been reopened following two years of repairs.

This reignited the nuclear debate in Germany, which decided in 2000 under then chancellor Gerhard Schröder to mothball its 17 reactors by about 2020 amid strong public opposition to atomic energy.

It also made nuclear energy a campaign issue ahead of September elections, with the Social Democrats (SPD) – junior partners in the governing coalition – and the Greens calling on consumers to boycott Krümmel’s Swedish operator Vattenfall.

Chancellor Angela Merkel’s conservatives are keen on extending the life of some nuclear power stations, however, because they say it will help Germany meet its climate change goals and reduce dependence on oil and gas imports.

A survey published by ZDF public television on Friday suggested that the problems at Krümmel had made nuclear power more unpopular in Germany, with 55 percent of respondents opposed to it, up from 40 percent a year ago.

Under the plans of the Schröder government, Krümmel is due to shut down in 2016, and Emsland in 2020.

Just under 30 percent of Germany’s electricity is generated with nuclear power, compared with more than 40 percent with coal and around 12 percent with renewables such as wind and solar energy.

PARTNER CONTENT
How not to get shocked by your next German electricity bill
Url copied to clipboard!