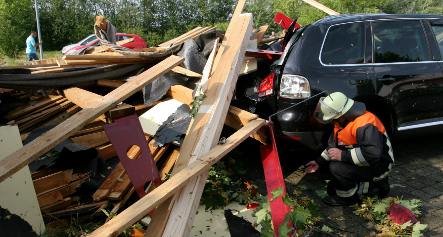 Lightning strikes in Marl and Haltern in the German state of North Rhine-Westphalia did more than €100,000 in property damage. Felled trees blocked streets and damaged cars in Aachen, Duisburg, and Bottrop as heavy rains flooded cellars. Hail in Aachen destroyed a supermarket roof.

Police registered more than 500 emergency calls in Bavaria. In Passau two people were injured an aluminium train station roof blew off, landing on two boats and six vehicles. Several other roofs blew away and trees fell on cars.

In Deggendorf the entire roof of a building materials factory blew off. In Straubing a mobile phone tower was damaged by lightning.

In the state of Baden-Württemberg trees were uprooted, streets flooded and trains were delayed as police received more than 200 emergency calls. Lightning strikes led to roof fires that did more than €90,000 damage in Aalen and Bad Mergentheim, police reported.

Police in the state of Mecklenburg Western-Pomerania reported flooded streets and cellars. According to rescue coordinators, the entire fire fighting force in the northwestern part of the state was out pumping water from cellars and replacing manhole covers on flooded streets.

A 25-year-old was injured near Neubrandenburg when a tree fell on his car.

Meteorologists said Friday they expect the humid and tempestuous weather to improve by Saturday after the last storms roll through on Friday.