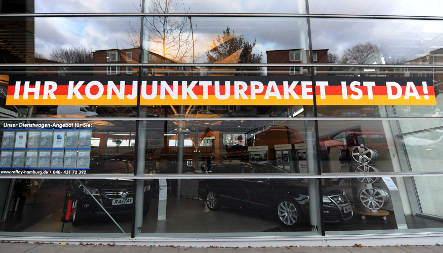 
The Bundesbank said on Friday it expects Europe's biggest economy to contract by a massive 6.2 percent in 2009.

“The German economy is currently in a sharp recession,” the Bundesbank wrote in its monthly report for June.

Pressure on economic activity “is likely to ease during the course of 2009” the bank nonetheless added, while warning that “it does not look like there will be a significant upturn in the near future.

“Economic activity is expected to remain at a subdued level in 2010,” the report said.

The estimations are in line with that of the German government, which has forecast an economic recession of around 6.0 percent this year, the worst contraction since World War II.

A major factor now weighing on the economy is unemployment, and the central bank warned that “more job cuts and a faster rise in unemployment may be expected in the coming quarters.”

It forecast that unemployment would reach 10.5 percent next year, compared with the level in May of 8.2 percent.

Inflation was expected to dip into negative territory in the coming months, though the medium-term trend would likely remain positive.

“On an annual basis, the general price level will remain stable in 2009, although it will probably rise again by 0.5 percent in 2010,” the Bundesbank forecast.