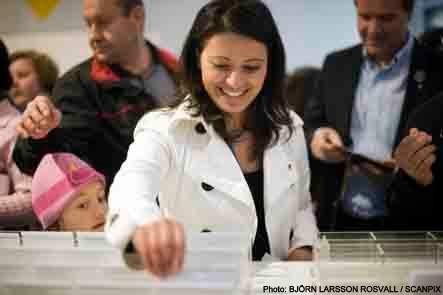 The Social Democrats had the greatest support with 31.9 percent, followed by the Moderates at 23.9 percent. For the most part, the results are similar to the Sifo poll conducted last week. For the current survey, conducted between May 11 to May 19, Sifo interviewed 1,897 individuals about which party they would vote for if the EU parliamentary elections were held today.

A third of those polled did yet report a party preference. That uncertainty, combined with difficulty in predicting voter turnout rates, makes the results of surveys about EU elections much less precise than traditional polls in national elections.

“There are a lot of people who say that they are going to vote who don’t, as well as the other way around. That makes everything much less certain,” Mikael Gilljam, a professor in political science at Gothenburg University, told SvD.

He also points out that behaviours that are applicable to national parliamentary elections do not necessarily carry the same weight in the case of the EU elections. For instance, factors such as class and party loyalty are not as significant as they are for national elections.

“People are a bit more inclined to vote as they see fit. But when they respond to opinion polls, we believe that they answer in the same way that they would if it were a normal party identification poll.”

Toivo Sjörén, who is in charge of the Sifo poll, told SvD that no conclusions about voter participation can be drawn on the basis that a third of respondants report not knowing which party they will vote for.

These results of the latest Sifo survey differ from those of another opinion poll released by Demoskop ealier this week. According the poll conducted by Demoskop between May 13 and May 20, the Pirate Party now has the support of 7.9 percent of Swedish voters, up from 3.4 percent from a week earlier

Demoskop also reported that the Pirate Party has climbed into third place among parties running for the European Parliament elections.

According to Sjörén, this demographic is not adequately captured in the Sifo poll, which is conducted by telephone. While only around 10 percent of the general population have only a mobile phone, around one-fourth of young people do not have a landline, relying solely on their mobiles.

“It’s a source of error, but when we have done experiments this group, generally speaking, does not differ from those with landlines. Young people are still well represented. But in general, young people are a source of uncertainty, so it could go any which way over the next several days,” Sjörén said.

EU ELECTIONS
European elections: What you need to know about the eurosceptics and populists
Url copied to clipboard!