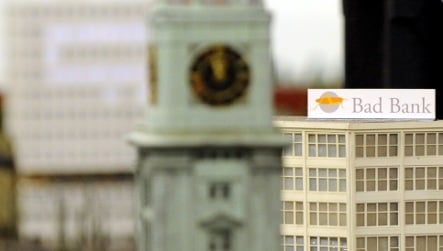 There was an accord “to a large extent,” Steinbrück said following a meeting with – amongst others – Chancellor Angela Merkel, Foreign Minister Frank-Walter Steinmeier and Economy Minister Karl-Theodor zu Guttenberg.

“We are a big step further forward,” said zu Guttenberg, adding the government hoped to have a law in place before elections on September 27.

the plan could be taken at a cabinet meeting next month.

Berlin’s bid to rid its banks of these bad holdings follows similar plans in other countries, notably the United States, Britain and Ireland.

The issue of how to remove “toxic assets” from banks’ balance sheets has become a particularly thorny political topic in Germany with only five months until the country goes to the polls to elect a new chancellor.

Politicians are torn between the urgent economic need to revive Germany’s troubled banking sector and the political desire not to saddle taxpaying voters with a huge bank bailout bill.

According to finance ministry estimates reported Tuesday by the Frankfurter

Allgemeine Zeitung daily, German banks have as much as $853 billion ($1.1

trillion) of toxic assets on their books that are either worthless or can not be sold easily in the current market climate.

Weighed down by these bad holdings, banks have become reluctant to lend money to consumers and businesses, depressing the German economy, which is facing its worst recession since World War II.

International Monetary Fund chief Dominique Strauss-Kahn said Monday that cleaning up bank balance sheets was more urgent than injecting cash into the economy with stimulus packages and slammed governments for acting too slowly.

“In Germany, other European countries or in the United States, everywhere we are being too slow to deal with this topic,” Strauss-Kahn said in an interview with the Handelsblatt business daily.

The solution proposed at the meeting by Steinbrück is to allow banks to park toxic assets in their own individual mini “bad banks.”

The idea of creating a single “bad bank” as a dumping ground for all toxic holdings in Germany has been ruled out, officials have said.

Steinbrück’s plan distinguishes between “toxic” or completely worthless assets and “illiquid” assets, which banks are finding impossible to sell in today’s clogged-up markets but which could eventually rise in value.

For toxic assets, “individual banks and shareholders must take most of the responsibility,” Steinbrück said recently.

However, the taxpayer would provide a guarantee for the “illiquid” assets, covering the banks for losses that arise but also reaping the profits if the assets should gain in value later on.

“This could eventually help the state out because we assume that the bonds issued by the government as well as by companies will one day become liquid again, so their value is not lost forever,” Steinbrück said.

Speaking on RBB radio earlier Tuesday, the economic policy spokesman for Merkel’s CDU party, Otto Bernhardt, said that only around 20 of the country’s 2,500 banks would likely be affected.

Zu Guttenberg said there were two different models still being discussed, one for commercial banks and another for Germany’s Landesbanken – state-owned, regional banks that play a vital role in the economy.

Bigger commercial banks, such as Deutsche Bank, have already signalled they will not take part in the scheme, the finance ministry proposal said, according to the Frankfurter Allgemeine.

Bernhardt said it was impossible to predict how hard taxpayers would be hit by the scheme. “No one today can answer the continuously-asked question of how much it will cost individuals,” he said.

But Steinbrück pledged that both models being discussed do not involve the government taking liability for the toxic assets.

There will “not be an additional burden on the budget. The state will offer a guarantee,” the minister said.