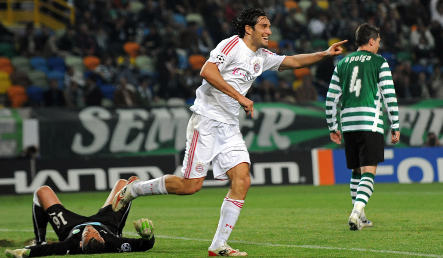 
Luca Toni insists Bayern Munich must use the same passion they showed in their Champions League hammering of Sporting Lisbon in midweek to get their Bundesliga campaign back on track in Bremen on Sunday.

The Italian World Cup-winning striker scored twice in Lisbon as Bayern routed the home side 5-0 and are virtually guaranteed a Champions League quarter-final berth.

But Bayern’s progress in Europe is a far cry from their Bundesliga form where they have lost three of their last four games and are down to fourth in the table – four points behind leaders Hamburg.

“We showed the real Bayern Munich in Lisbon,” said Toni. “We’ve shown what we’re capable of. The decisive factor was the whole team playing with passion and resolve, because we want to get out of a difficult situation together. Now we need to start winning again in the Bundesliga.”

Werder Bremen host Bayern on Sunday, but few Munich fans will need reminding of the outcome the last time the two sides met.

Since then Bremen have dropped down the table to 11th, but with Brazilian midfielder Diego back after a four-match suspension, Werder will test Bayern.

“We succeeded against Lisbon where we’ve failed in other matches recently,” said Bayern defender Philipp Lahm. “That’s how we have to continue, we’ll enjoy the victory, but our focus is on Bremen.”

Bremen, last year’s league runners-up, will be buoyed by having knocked AC Milan out of the UEFA Cup on Thursday.

Bayern have injury doubts over defender Massimo Oddo and Lucio who both picked up knocks in Lisbon.

League leaders Hamburg host VfL Wolfsburg on Sunday and are yet to be beaten at home.

Both sides have just two days recovery between their UEFA Cup matches against NEC Nijmegen and Paris St Germain respectively.

Despite being probed for a delayed doping test, Hoffenheim pair Andreas Ibertsberger and Christoph Janker are in the squad to face Borussia Dortmund.

After drawing 3-3 with Stuttgart last Saturday, Hoffenheim dropped to second in the table and failed to win their last three games after their fairytale rise from the second division to the summit of the Bundesliga.

Former league leaders Hertha Berlin have a golden chance to get back to the top when they host bottom side Borussia Moenchengladbach at the Olympic Stadium in the German capital with striker Marko Pantelic still out with a knee injury.

Bruno Labbadia, boss of fifth-placed Bayer Leverkusen, is considering handing a debut to 19-year-old forward Tony Kroos at Hanover on Saturday after the teenager joined from Bayern Munich last month.

On Friday, Cologne will look to back up their shock 2-1 win at Bayern at Arminia Bielefeld while on Sunday seventh-placed VfB Stuttgart are at second-from-bottom Karlsruhe.

In Saturday’s other games Eintracht Frankfurt are home to Schalke 04 and Bochum host Energie Cottbus.