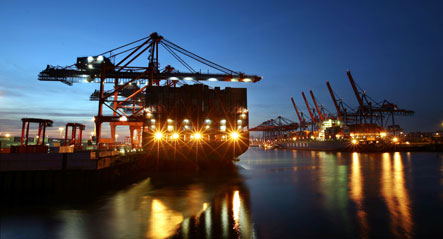 
Berlin forecast on Wednesday that Germany will suffer its deepest post-war recession this year just as Chancellor Angela Merkel's cabinet chewed over a historic rescue package aimed at boosting the economy.

Germany’s economy, which accounts for about a third of eurozone output, will contract by around 2.25 percent in 2009, the government said, as the sharp global slowdown hits demand for the country’s all-important exports.

“For this economic downturn that we are unfortunately having to predict is without precedent in the postwar period, it is the biggest slump in Germany’s recent history,” Economy Minister Michael Glos told a news conference.

“The German economy is facing this year the greatest challenges since unification (in 1990). Germany is integrated into the global economy like hardly any other industrialised country.”

The package, the biggest in modern German history, includes a huge increase in spending on roads, railways, hospitals and schools. Other elements include cuts in tax and social security contributions, as well as incentives for consumers to buy new “greener” cars to boost Germany’s ailing auto sector.

Glos said that this programmes, together with similar efforts being made around the world, would begin to help the German economy in the second half of 2009.

Germany entered a recession in the third quarter of 2008 with two successive three-month periods of shrinking economic output. Preliminary official figures last week showed that the slowdown accelerated sharply at the end of the year, contracting by between 1.5 and two percent in the fourth quarter – the sharpest fall in two decades.

Unemployment hit three million in December, rising for the first time after almost three years of unbroken decline. Data have shown industrial orders and output falling off a cliff.

In recent years German exports have been its source of strength, but the global downturn has turned them into an Achilles’ heel – Glos forecast they would slump 8.9 percent this year.

Germany “is suffering more than other countries,” said Henrik Uterwedde from the Franco-German Institute (DFI). “The real motor of the economy has always been exports while domestic demand has tended to stagnate.”