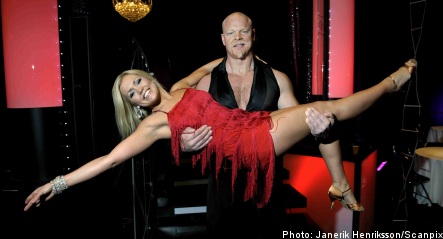 
British choreographer and Let's Dance judge Tony Irving was so taken aback by the gyrations of the world's strongest man, Magnus Samuelsson, in Friday evening's heat that he declared that he was "In looove!..."

Samuelsson had just finished his rumba with partner Annika Sjöö to Bill Withers’ hit “Ain’t no sunshine.” Tony Irving was left speechless by the gyrations of the statuesque man mountain Magnus Samuelsson and could only utter the words:

“I’m in love,” before almost falling off his chair.

“I know that the rumba should be a meeting of the manly and the womanly, but how about dancing man to man?” Tony asked.

Magnus took the whole episode in good humour and let Tony down gently on his offer of a dance by explaining that he was already married.

The pro-celebrity dance competition Let’s Dance is one of the most popular shows on Swedish television and held its second of 12 heats on Friday.

Former athlete Linda Haglund and her partner Martin Ragnarsson were the first to be voted out of the show. Their hot rumba not withstanding, the pair were given a low score by the jury and a thumbs down from the television audience and will take no further part in the competition.

“It feels a little embarrassing when you are voted out, but everybody is very good and someone has to leave the competition,” Linda Haglund said to TV4 directly after the show.

Radio presenter Kitty Jutbring continued in her role as the show’s infant terrible after her outburst last week that despite her blonde locks she was not being allowed to join the “battle of the ‘blondes’,” with Magdalena Graaf and hot favourite Idol jury member Laila Bagge.

Kitty was taken apart by the jury and Tony Irving later told her “to shut up and dance.”

Irving was wrong however when he predicted that Kitty would be the one to leave the show this week as she received the backing of the audience and an enthusiastic ovation from her fellow contestants.

Other highlights of the evening were an impromtu strip show by former glamour model Magdelena Graaf and her partner Daniel Da Silva as the ‘blonde’ battle hotted up.

Natural blonde Laila Bagge received top votes from the jury and continues to set the pace while the jury started to warm to popular blogger Isabella “Blondinbella” Löwengrip, who was rather harshly described as “like Bambi on thin ice” by chairman Irving last week.

Let’s Dance attracts a television audience of over two million viewers and will air on TV4 at 8pm on Friday for the next 10 weeks.

Who are this season’s contestants and dancers? See photo gallery